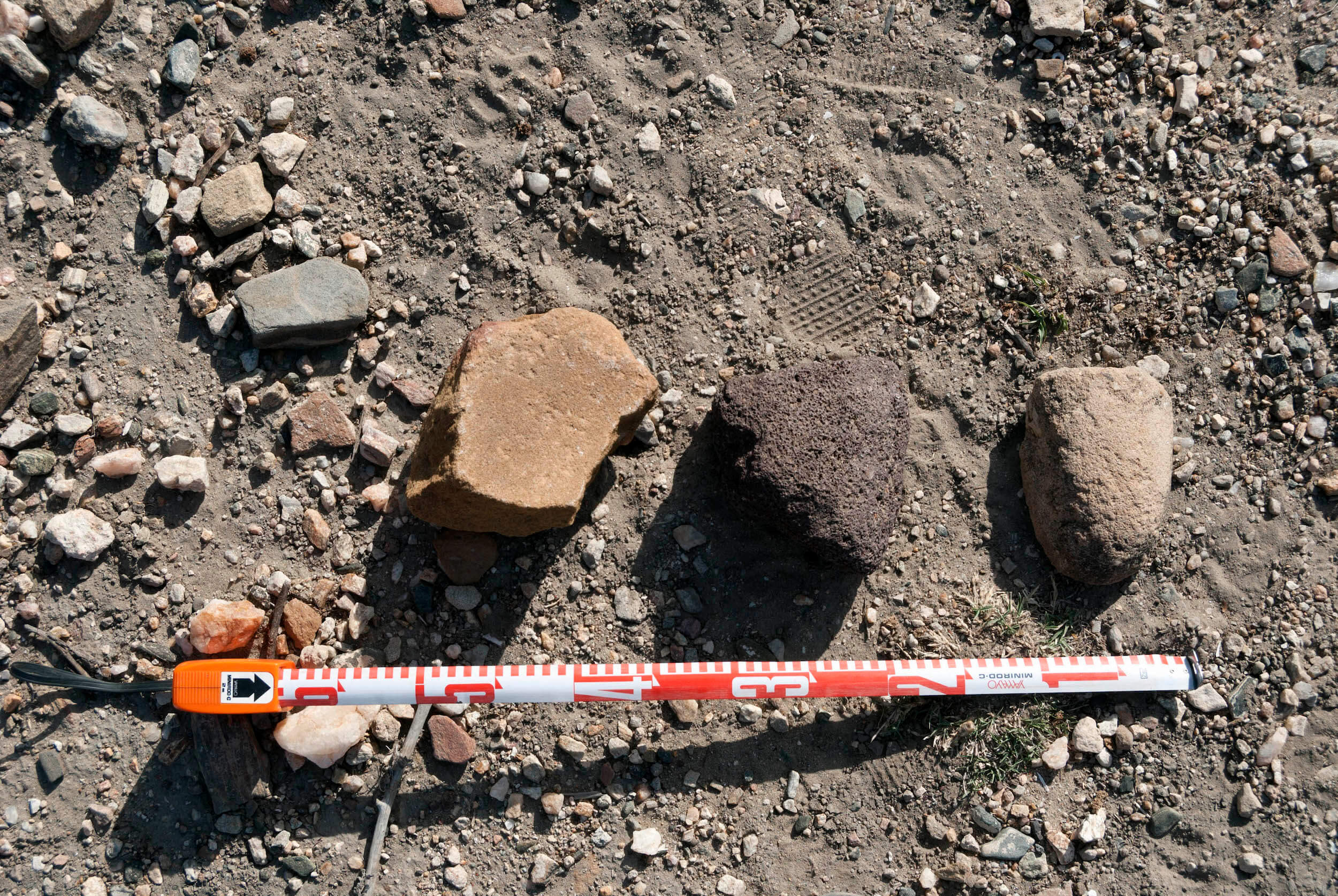 Towns in a Sea of Nomads

The Archaeology of Urban Settlements in Medieval Somaliland

Somaliland has been historically considered a land of nomads and without permanent settlements. Yet, there have been at least two main periods in the history of the Somaliland region when a significant part of it was indeed dotted with towns and villages coexisting with the ever present nomadic culture. One of these periods dates from the 19th century until our times. This period witnessed the (in some cases) emergence, growth and consolidation of the main cities of Somaliland, such as Hargeisa, Berbera or Borama. The other period is much less known and it corresponds to the medieval and modern ages, when a flourishing network of urban sites and smaller villages integrated within the Sultanates of Ifat and Adal covered large parts of western Somaliland. It has not yet been completely established when, how and why these settlements emerged, but the research conducted during the last five years points to a direct relation with the development of state structures in the Horn of Africa. During the coming years, the StateHorn project will examine all aspects related to urban life and its possible impact on the hierarchization and organization of the territory, the setting up of trade networks and their role as interaction nodes between nomads and urban dwellers. 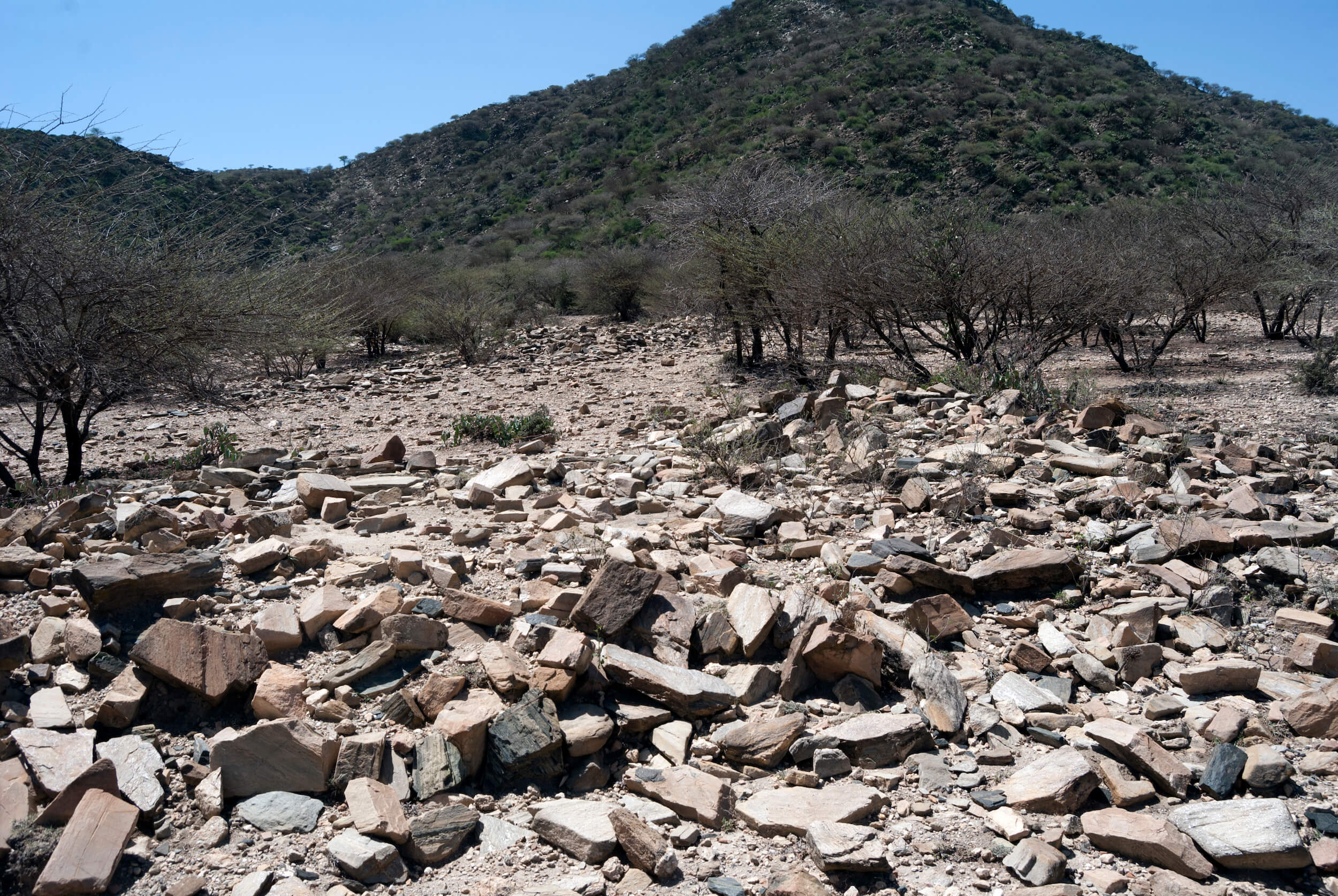 Although Somaliland has been historically considered a land of nomads without permanent settlements, there have been at least two periods in its history when a significant part of the country was also dotted with towns and villages coexisting with the ever present nomadic culture.

The existence of medieval towns and villages in Somaliland is well known since Alexander T. Curle published his seminal work “The Ruined Towns of Somaliland” in 1937, wherein he described a number of sites in four different regions of Somaliland, in particular around the area of the city of Borama. This area has been historically and well into the present times the best suited for cultivation and irrigation in Somaliland, thus supporting the establishment and growth of permanent settlements. Successive research in Somaliland has also shed light onto areas beyond the fertile Borama region. Thus, many more sites have been found in the Sheikh and Burao areas and even in far eastern regions such as Sanaag, where the development of urban structures in the medieval period, as it is today, might have been a challenging undertaking. Research has also showed a far more complex world than the originally described by Curle, who focused on size as the main differential criteria to organize the sites. During the last five years of research carried out by the Incipit team it was possible to establish that some of these “urban” settlements were in fact caravan stations, fortresses, religious centres or simply nomadic meeting points. Such a variety of sites and usages adds layers of complexity to the history of the region, which are just beginning to be explored but which will enrich substantially our understanding of the religious, economical, social and historical dimensions of the societies during the historical period under study. At the moment, around forty sites have been identified. Yet, the information available for many of these sites is still scarce, often being reduced to just their naming and location.

“After the last five years’ research by the Incipit team, we know that some of these settlements there were in fact caravan stations, fortresses, religious centres or nomadic meeting points” 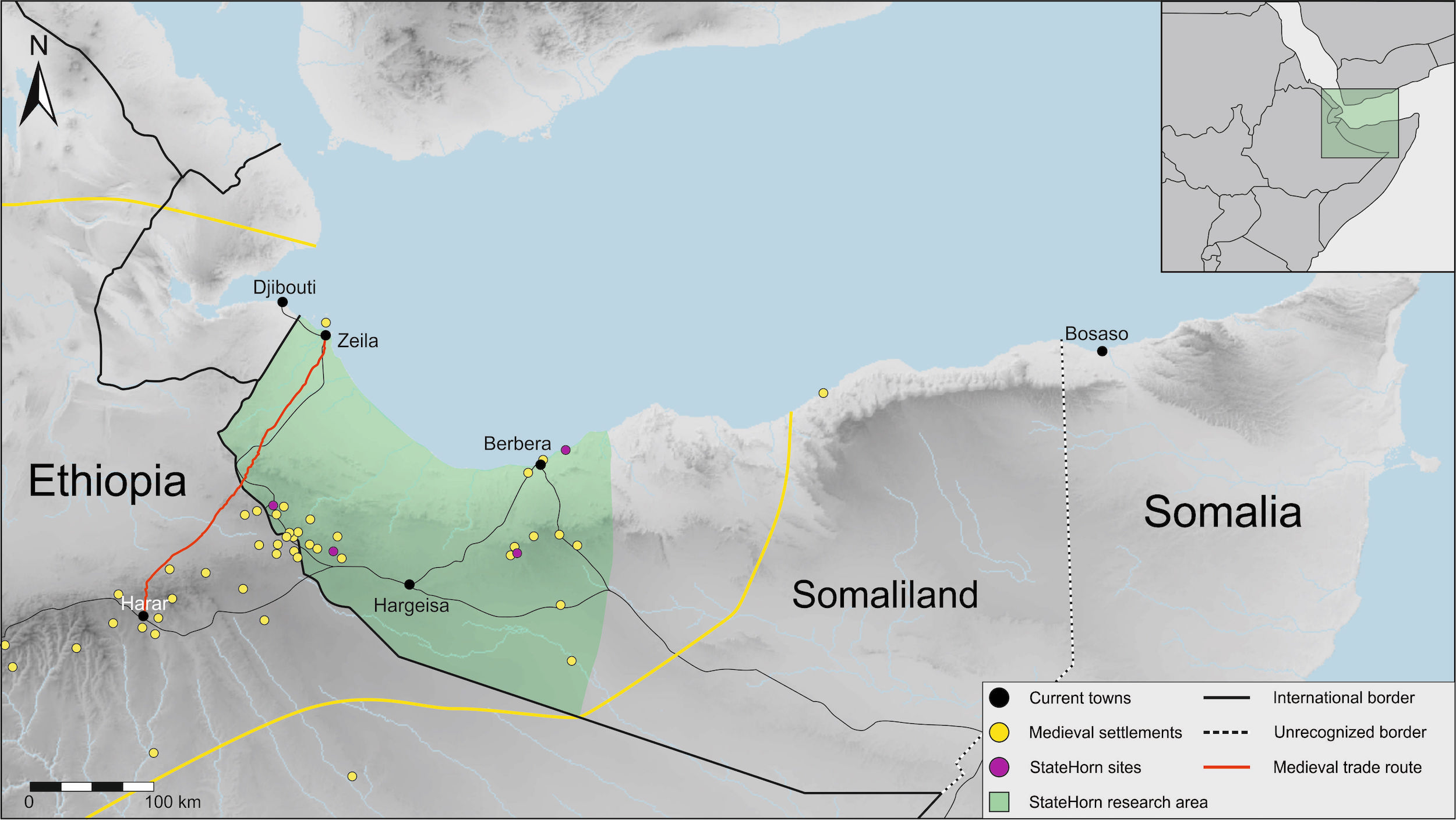 Medieval settlements of Somaliland and the nearby region of Ethiopia. ©Jorge de Torres.


Regardless of their function or size, all the medieval settlements in Somaliland show a remarkable degree of uniformity, which seems to point to a shared identity. Thus, the settlements follow an identical constructive system, the only differences observed relating to the size of the houses, the type of stones used and the care given during construction. Leaving aside a few exceptions, the sites lack any traces of urbanism, the houses being scattered along the landscape. However, this doesn’t imply a lack of spatial ordering: mosques, cemeteries and the topographic position of the sites probably served to organize the space, and some of the empty spaces between the houses might have served as public areas –market places, squares, and so on. Houses are made of well laid flat stones of middle size, bound with mud, and have rectangular or square shapes. Although their sizes vary they are usually around between 20 to 40 sq. meters and partition walls are clearly visible defining two or three rooms. There are some exceptions though: the recent discovery of two large houses in Fardowsa measuring around 100 sq. meters each and containing six rooms might point to the existence of elite groups in these communities.

Left to right images: Houses in medieval sites around Borama, Street at the small village of Iskudarka Dayeergalka Kifiile. All photos ©Incipit Archaeological Project in Somaliland.


Leaving aside a few exceptions, the sites lack any traces of urbanism, the houses being scattered along the landscape. However, this doesn’t mean a lack of any spatial ordering.

The state of preservation of the structures varies. Some have been very well preserved and their walls are still standing more than two meters in height, while others are much more eroded and the walls remaining are just about 50 cm in height. Between the different sites no significant differences in size and quality of the houses have been observed: the buildings in small settlements are often as carefully built as those in big towns such as Abasa or Amud. Significantly, almost none of the sites recorded contains walls or any kind of protection, the exception being the main port of Zeila (which, according to 19th-century travellers was defended by walls but are no longer extant today), the fortress of Derbi Cad and a small bastion located by the Incipit team in the city of Abasa in 2018 (Torres et al 2018). Such a lack of fortifications contrasts with the almost permanent state of war between Christians and Muslims described by the medieval chroniclers, and might point to a relatively peaceful coexistence between nomads and urban dwellers in the region.

By any metric, mosques are the most important buildings in all the settlements, the larger sites having more than one. Mosques were built using the same construction technique as the rest of buildings and present square or rectangular shapes, square mirhabs and in some cases perimeter walls surrounding the building. In the bigger mosques such as those in Abasa and Hasadinle, circular, square or cruciform pillars were used to support the roof, which seems to have been flat. Significantly, neither minarets nor minbars have been documented in any of the mosques, a feature that could represent a difference with the mosques from the Somaliland coast dating to 16th century, such as that of Zeila, which included this feature. 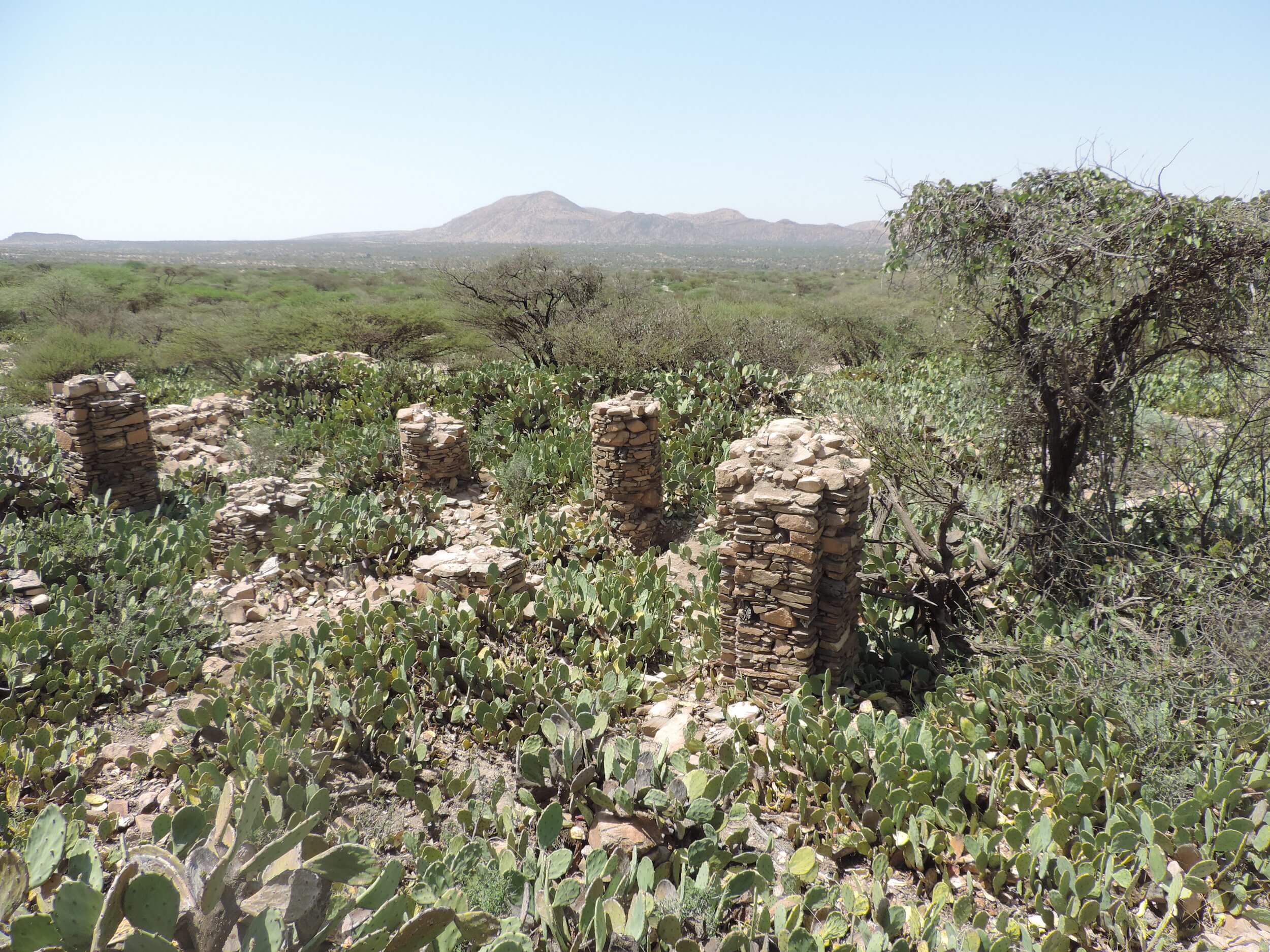 
Cemeteries show less uniformity than houses, although the most widespread type of grave corresponds to square or rectangular cists defined by plain slabs (sometimes, two of them laying in parallel), which have been found in all the sites where graveyards have been documented. In some occasions these cists have two or three small stelae marking the tomb, and are organized in rows. Other types of burials have also been documented –two simple stelae at the two extremes of the grave of the grave, a line of slabs defining one of the sides of the tomb or even small cairns with stelae on the top- all of them following Muslim burial conventions. Unless excavations are carried out, which for the time being has not been possible, it will be difficult to discern if these differences can be explained by changes through time or if they could be related to different Muslim traditions or ethnic groups. Such could be the case for some cairns –a typical nomad burial- which could be explained by the presence of nomadic communities in or around the settlements. 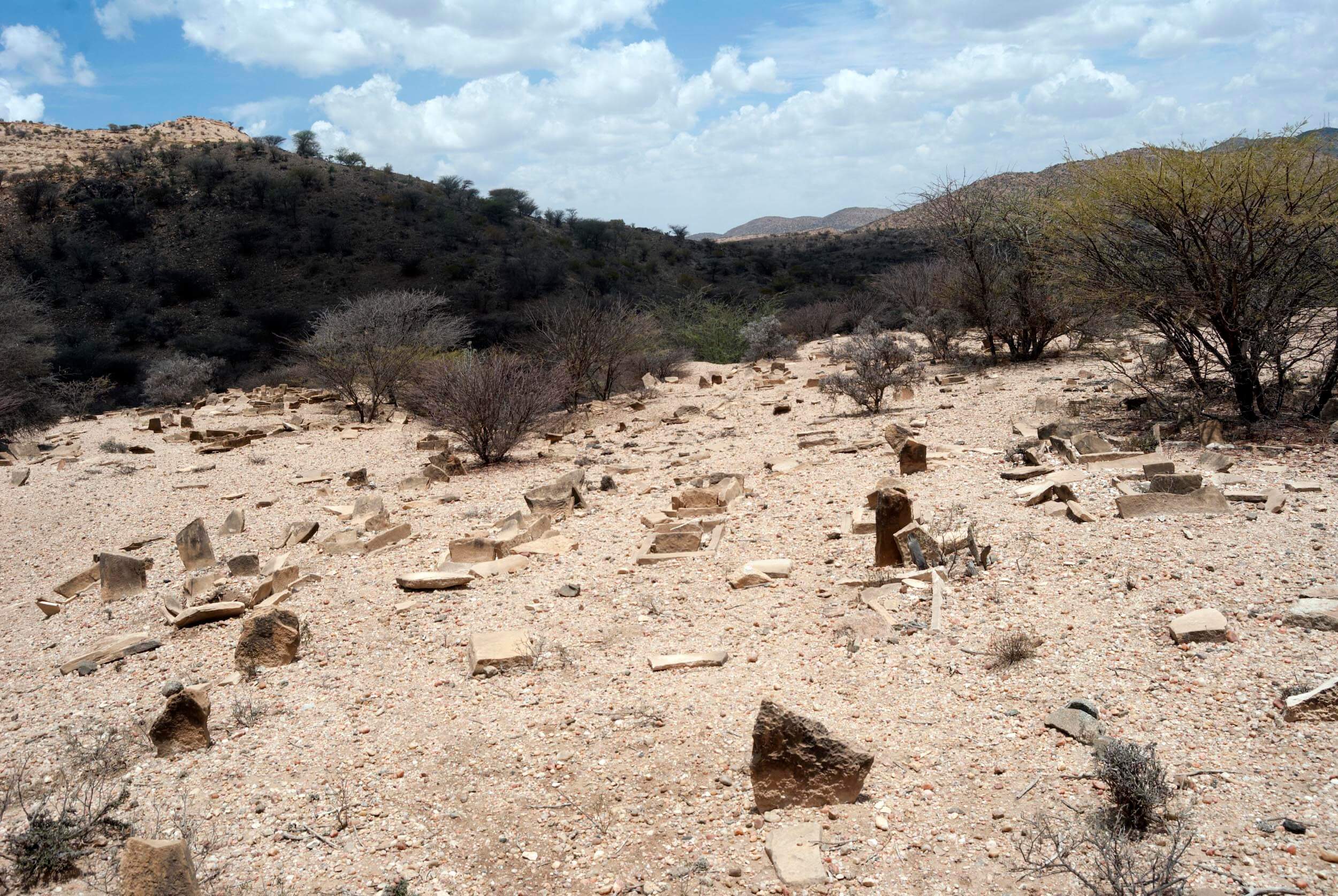 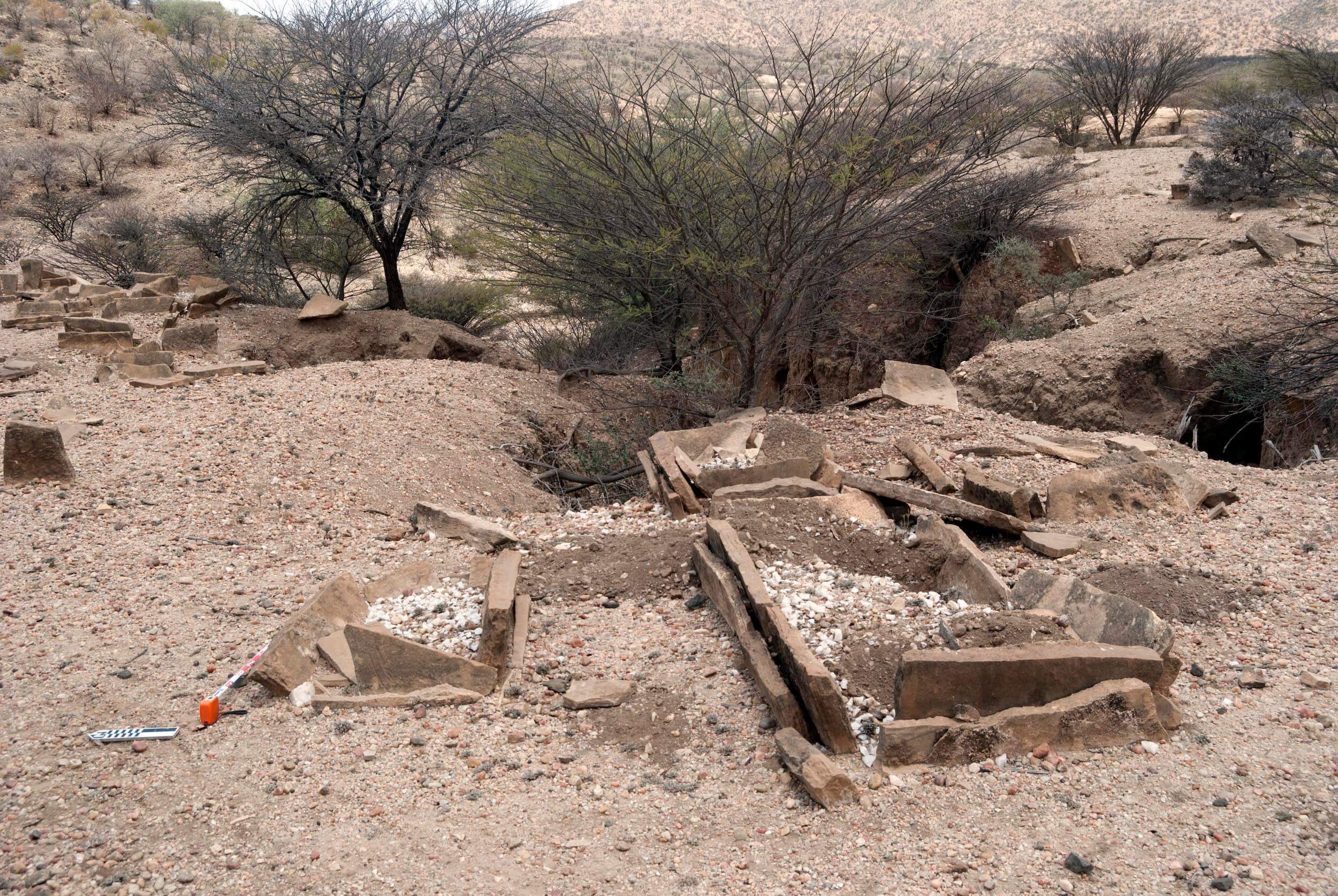 
Regarding their economic foundations, for a long time it was accepted that these settlements flourished along the main trade routes that crisscrossed the region. Although the trade must have been important during the medieval period, research carried out by the Incipit team in the region of Borama has produced very few imported goods (not more than four fragments in Abasa, one of the biggest sites); the imported goods appear in the archaeological record always together with cowries (a regional unit of exchange), which is another evidence of trade in that period. Agriculture rather than trade seems to have been the main activity of the sites surveyed during the 2018 campaign and most of those around Borama that were visited in the previous years. The position of the settlements close to cultivation fields but slightly away from the main routes, the scarcity of imported materials, the abundant presence of querns in all the sites and other objects related to cultivation –as weights of digging sticks- and structures possibly associated with agricultural activities (such as round stone platforms to prevent the construction of termite mounds close to the crops) reinforce this interpretation. Far from amending the previous view on trade networks, such an emphasis for agriculture in many of the medieval sites enriches our vision of the economic foundations of the Sultanate of Adal and it might help to explain the military expansion of the kingdom. This expansion, well documented historically, would be difficult to understand without a densely populated area which provided levies and surplus resources for the increasing armies of the sultanate of Adal. From a different perspective, it also introduces an interesting territorial pattern defined by a clear hierarchy of settlements according to their size. Moreover, it might help to explain the disposition of many sites across the geography of Somaliland. The StateHorn project will delve into these important topics, which can modify substantially our understanding of the political and social organization of the territory during the medieval period. 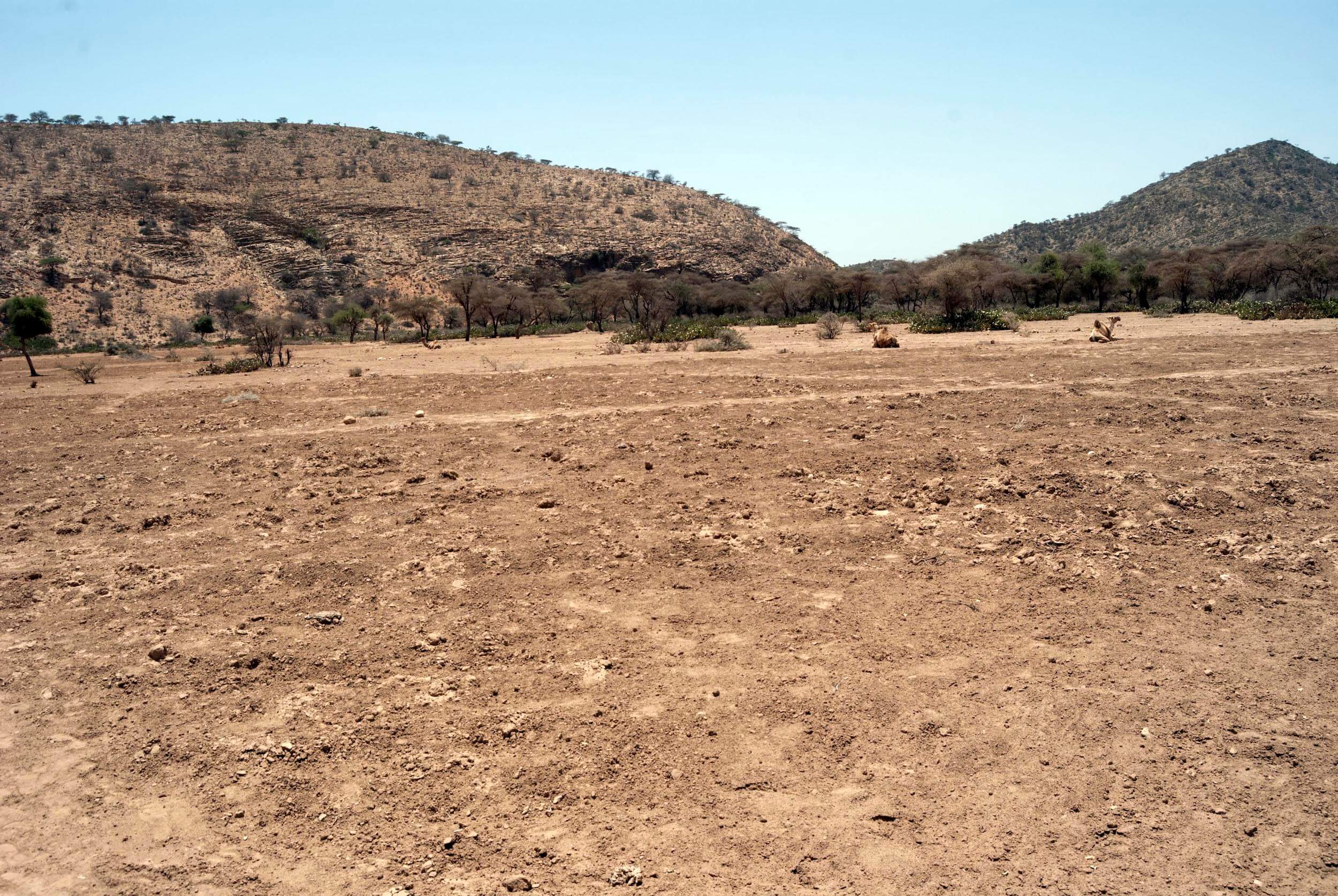 Fragments of querns found at the village of Hasadinle. ©Incipit Archaeological Project in Somaliland.


Although the knowledge of the medieval sites in Somaliland has grown exponentially in the last decade, there are still enormous gaps to fill. Many of the sites referred in Curle’s works are only known by name and no long-term excavation has ever been conducted yet in any of them. The StateHorn project will conduct, for the first time, a systematic study on these places which are often under severe threat due to the economic development, human activities and urban sprawl. Such is the case of Amud, the most famous medieval site in Somaliland that was described in detail by Curle in the 1930s, which now has completely disappeared. 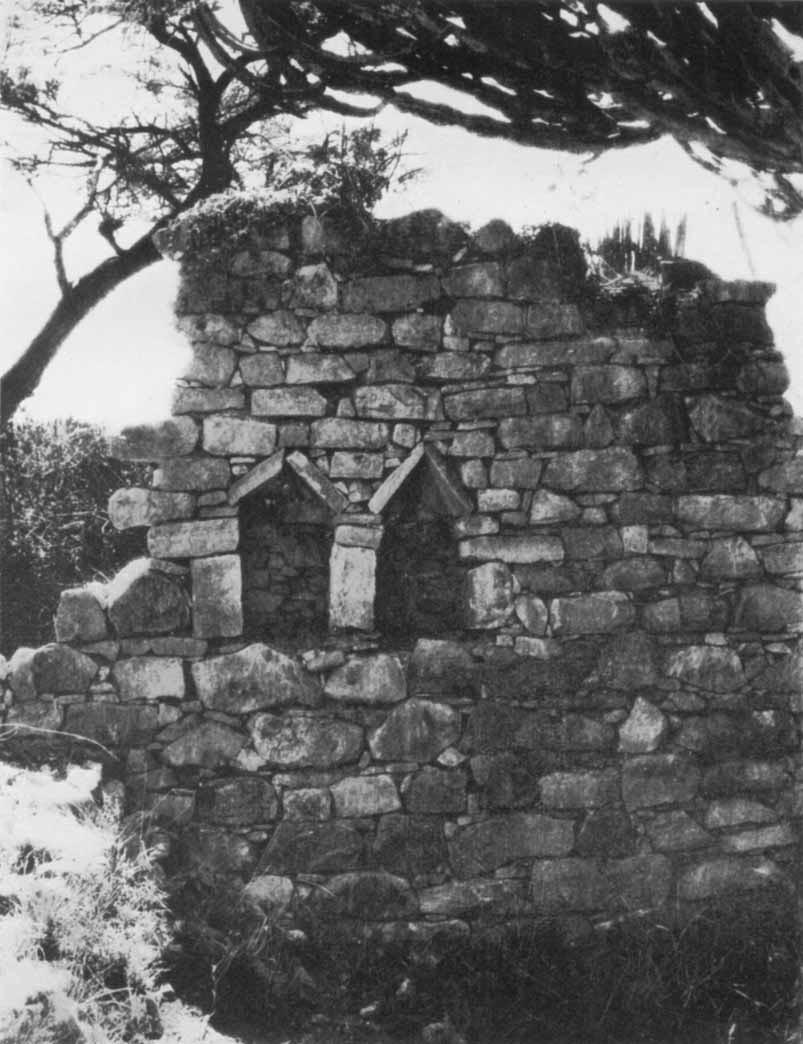 Photograph of a house of the important town of Amud taken y A.T. Curle in the 1930s. ©Trustees of the British Museum. 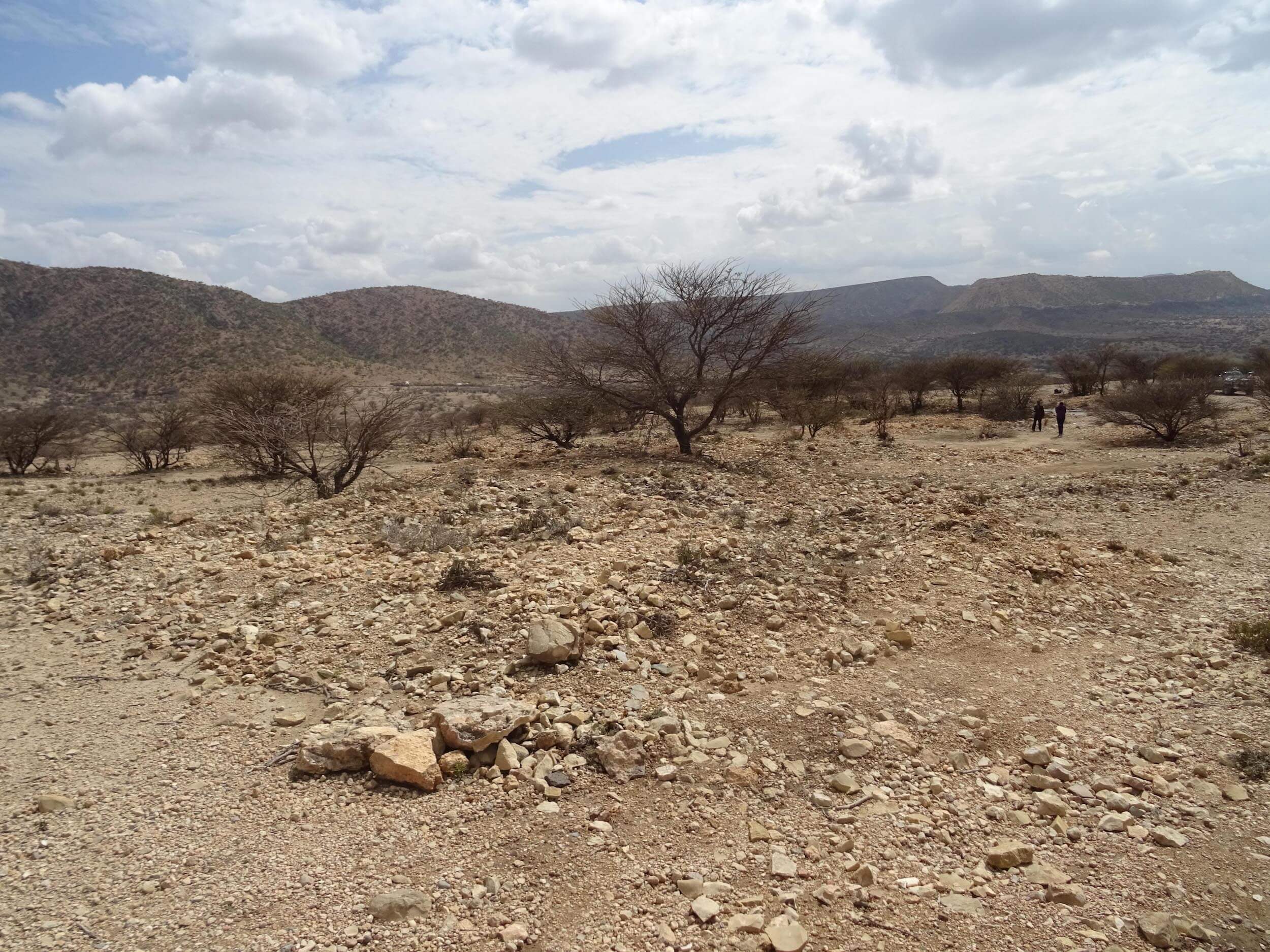 The site of Amud in 2017.©Incipit Archaeological Project in Somaliland.