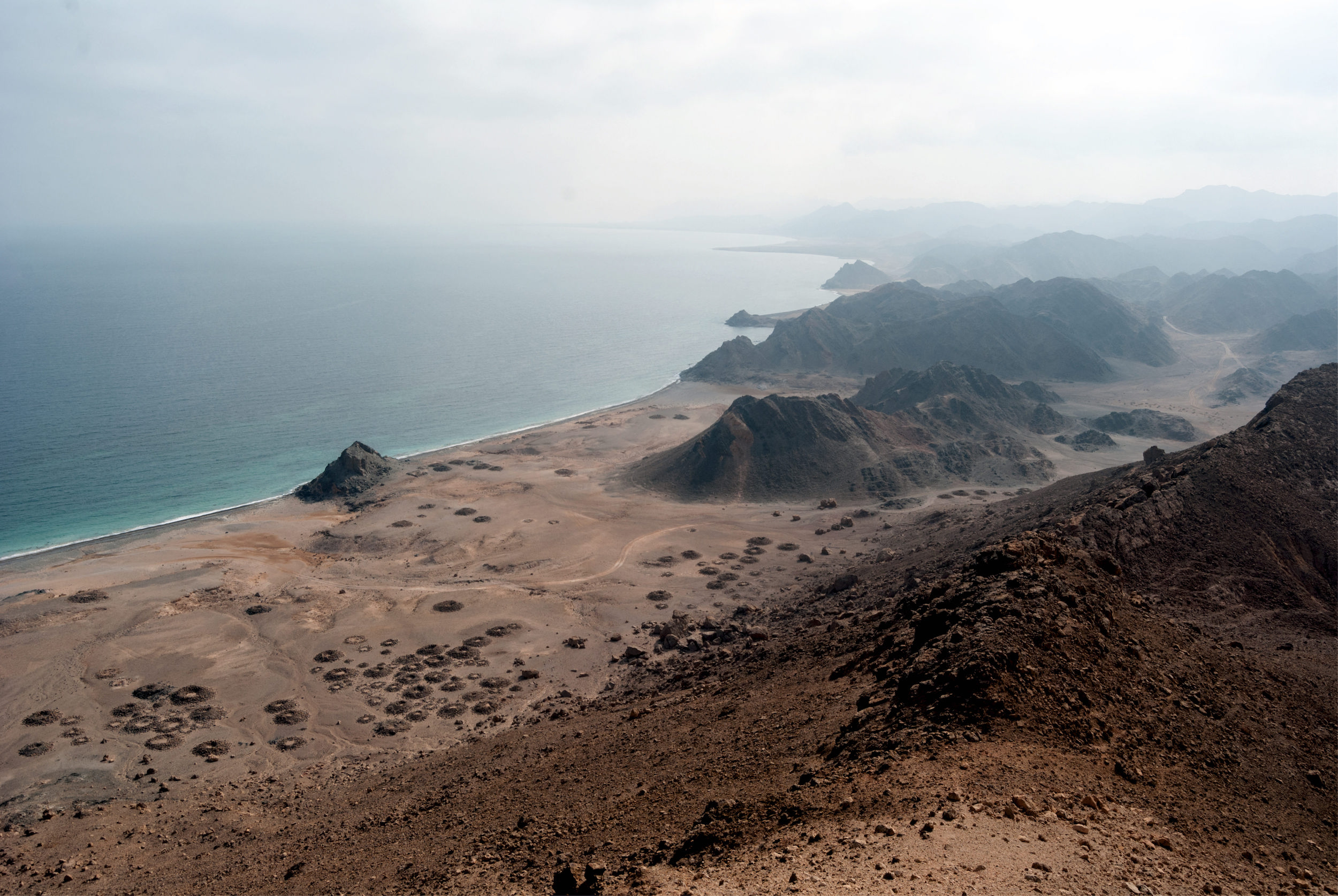 The Veins of the Horn

There are a number of places in the Earth that due to a combination of geographical features, cultural developments and historical dynamics have led to the emergence of especially vibrant areas. One of them was the Mediterranean World. Another one, probably equally or more important, was the Indian Ocean. The effect of the monsoon over the Indian Ocean is defined by a shift in the wind patterns between the winter and summer seasons, blowing from the Southwest during half of the year and from the Northeast for the other half, while also dividing the year in a wet and a dry season. This shift in the winds was mastered since ancient times by the sailors of the region, who used the favorable winds to travel from East to West from December to March, and return to the East from May to October. Around this seasonal movement a myriad of interactions, exchanges, routes and networks were established since as early as the third millennium BC. By the beginning of the Christian Era a huge network connecting the Mediterranean, Arabia, the Middle East, India, the Far East and Africa had been established, being one of the most dynamic and enduring economic and cultural systems ever organized by humankind. 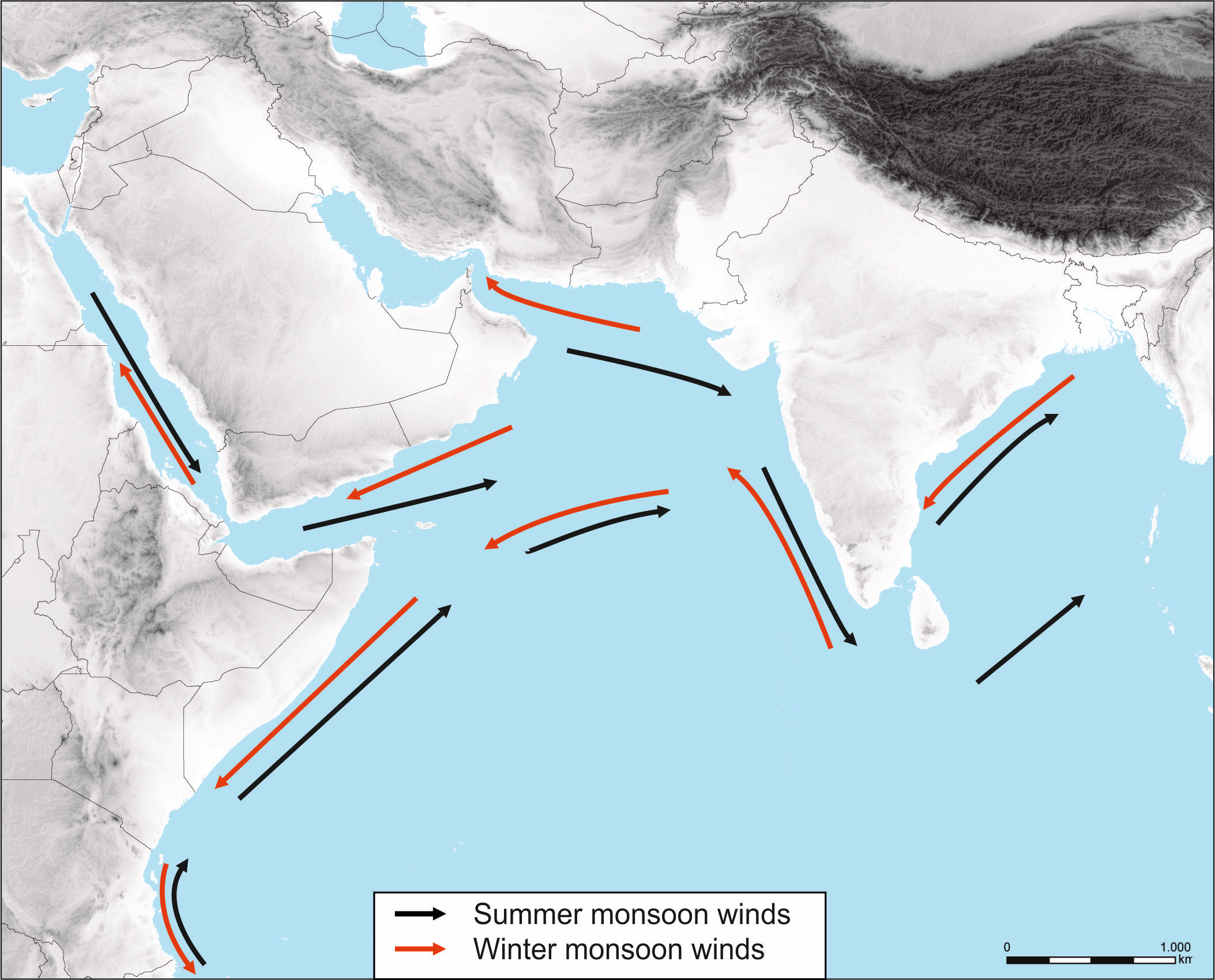 The Horn of Africa was one of the key node in this global trade and exchange network. Firstly, its geographical position at one of the sides of the Red Sea offered countless harbors and supply centres for all the goods and people travelling back and forth to and from the Mediterranean Sea and West Arabia, and also those arriving from India or aiming at the Swahili cities in East Africa. Secondly, the region was a major regional and global exporter of highly demanded commodities such as myrrh, frankincense and coffee. Finally, the Horn of Africa was itself a very dynamic trading hub, hosting a wide network of caravan routes and market towns connecting the sea ports with the interior of the African continent.

In the Red Sea, the trading season took place between October and April, when the winds would allow the arrival of ships to the shores of what is now Somaliland. This would also be the time when the nomads of the interior arrived to the coast after returning from their grazing campaigns in the South. The confluence of foreign merchants, nomads and caravans created a perfect environment for trade to thrive. As the trading season advanced, caravans headed to the interior of the Horn of Africa and with the April rains the nomads would also move south in search of good pasture for their herds.

“The geographical position of Somaliland, at one of the sides of the Red Sea acted as a hinge for all the goods travelling back and forth from the Mediterranean Sea, west Arabia, those arriving from India or going to the Swahili cities in East Africa” 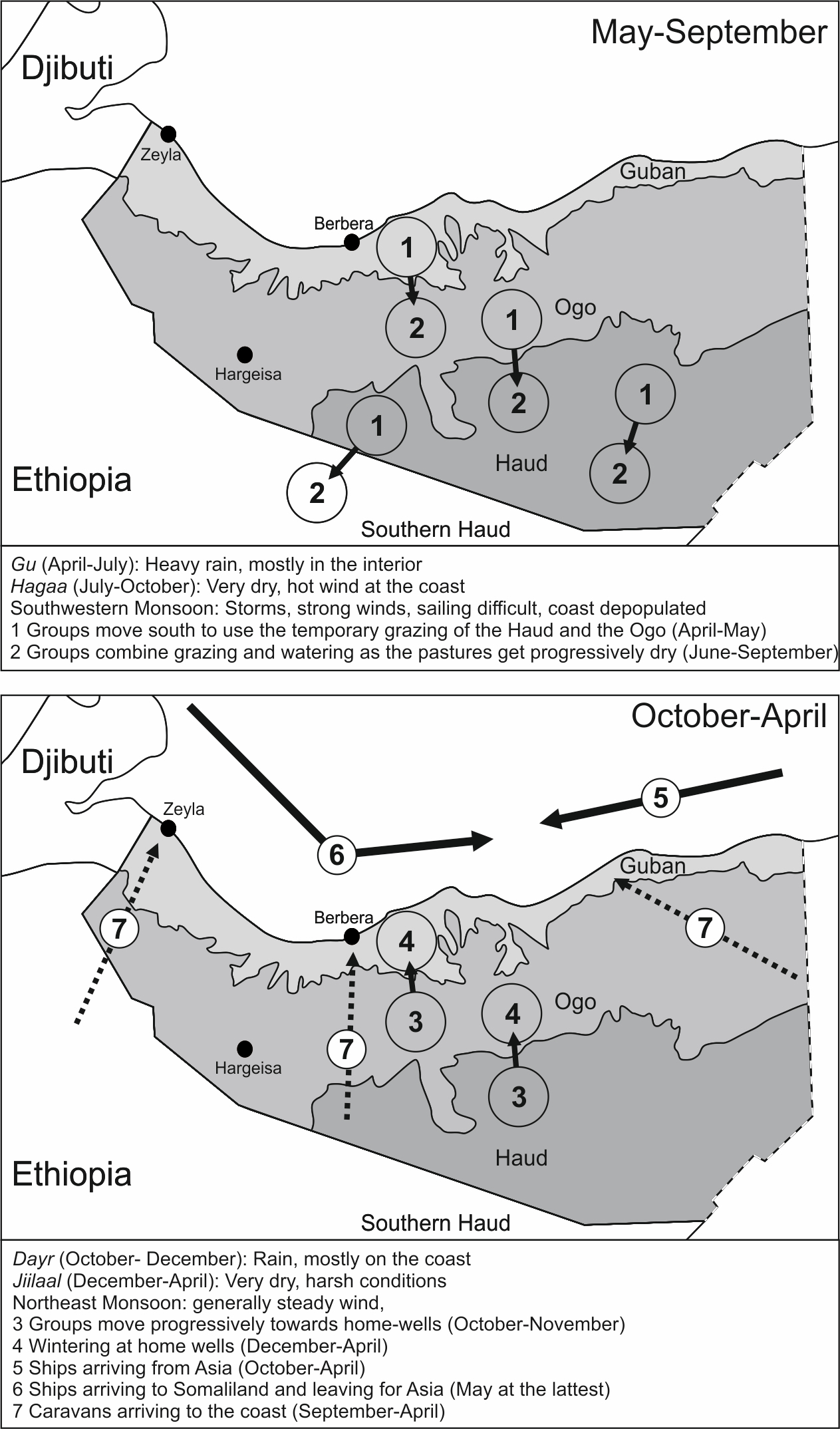 It is not know with certainty for how long this system was active in the Horn of Africa, neither do we know the exact scale of it, but is likely that it was a millennia old, at least as old as the civilizations that developed there, from the Aksumite, to the Christian and Islamic ones and those flourishing in what today is central and southern Ethiopia. The first archaeological evidence of interactions with the nearby regions such as Arabia can be dated to the 1st millennium BC. Yet, the first solid evidence of long distance trade date to several centuries later. Sites such as Xiis in eastern Somaliland have yielded materials from the Mediterranean Sea, the Parthian empire or the Indian subcontinent, thus pointing to well established trade routes, which are already confirmed by written documents such as the Peryplus of the Red Sea, a text written by a Greek sailor describing the trading posts along the coast of the Horn of Africa. During the first millennium AD data is very scarce, but trade undoubtedly continued for the sites dating to the 11th century and later attest to the existence of well-established and consolidated trade routes. 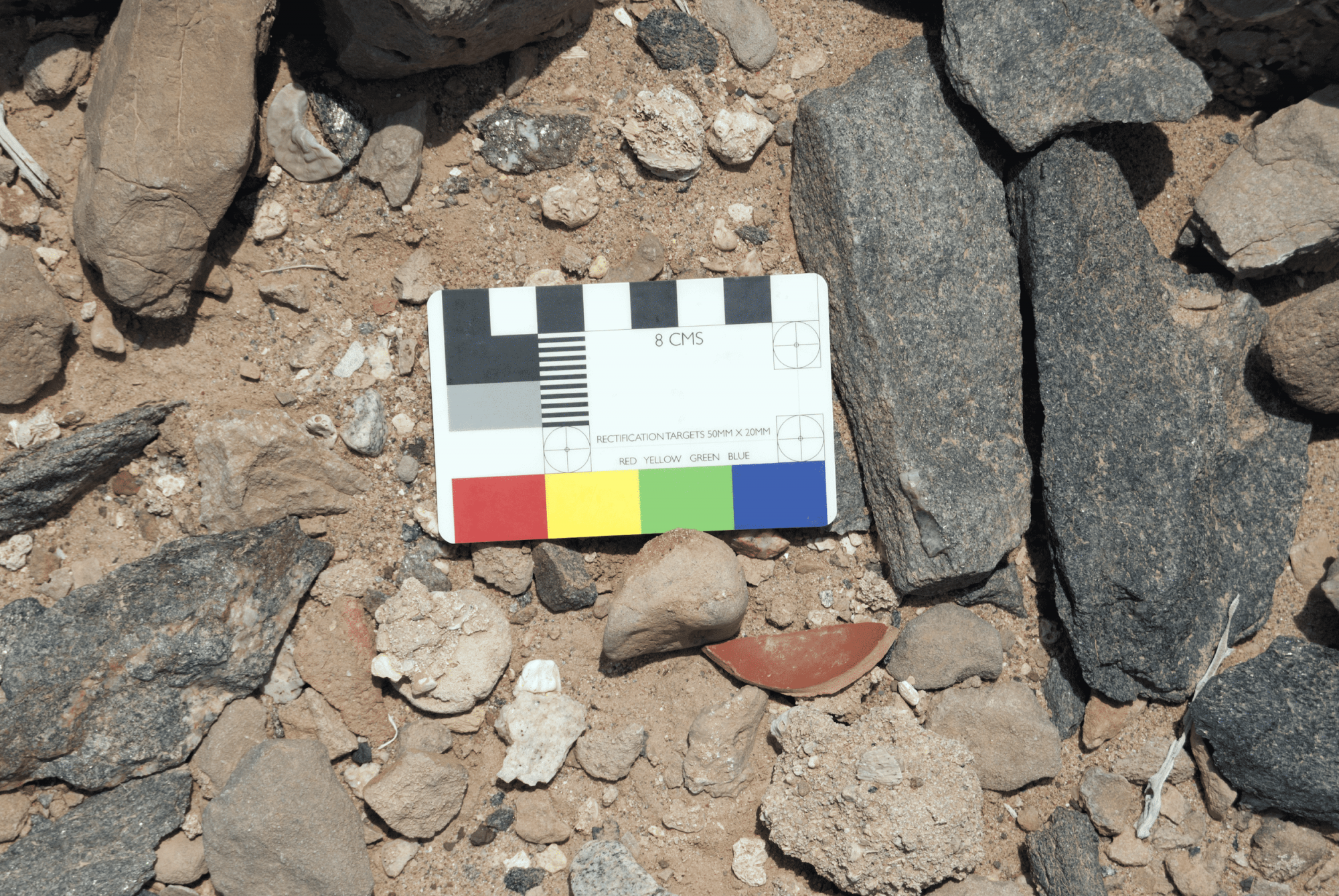 
Sites such as Xiis in eastern Somaliland have yielded 1st century AD materials coming from the Mediterranean Sea, the Parthian empire or India

The Medieval and Early Modern periods (11th-16th centuries) were the heyday of the trading circuits in the Horn of Africa, for it is then that an increase in the commercial activity and a boost in the relationships with Arabia and the Middle East are recorded, as well as the development of a network of towns and villages that facilitated the journeys and provided a safe haven and a marketplace for the caravans. The structure of the system did not diverge from that in earlier times: nomads and merchants traded in the coastal meeting points and caravans travelled to the interior. However, the appearance of urban centres introduced an element of complexity to the organization of trade, and the integration of the region in increasingly stronger polities also ensured stability and boosted commerce. The result was a very solid and well-organized system which for centuries acted as a stabilizer for the region. The study of its structure and mechanisms will be particularly important for StateHorn. The project will study three sites directly related to trade: Siyaara (a coastal trading post), Fardowsa (a trading town south of Berbera) and Qalcadda (a caravan station probably run by the Adal State). It is expected that the excavation and study of these sites will provide plenty of information about the medieval trade routes and the changes suffered through time, on the intensity of the commerce and on the social and cultural implications of these exchanges for the local communities of the Horn of Africa. 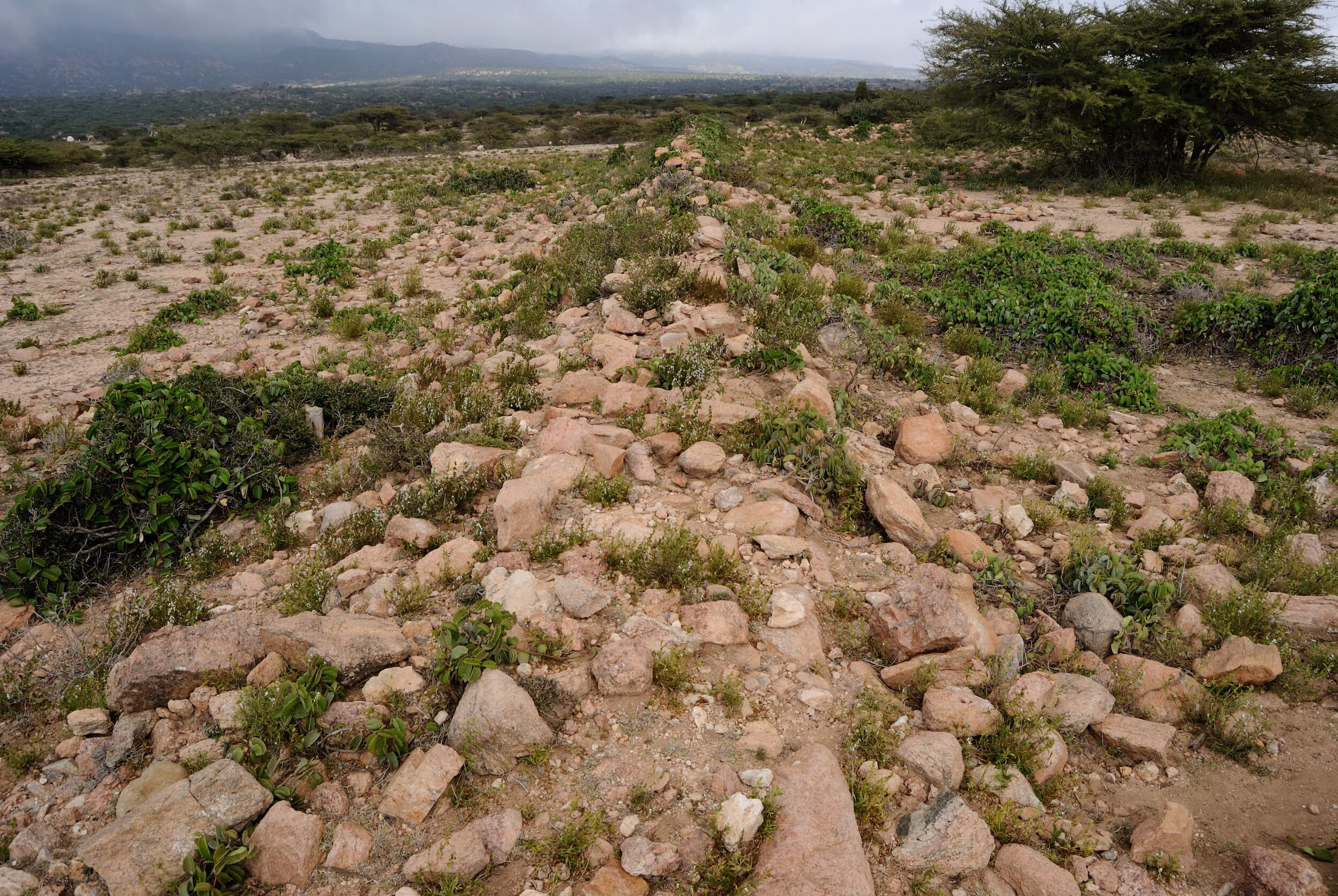 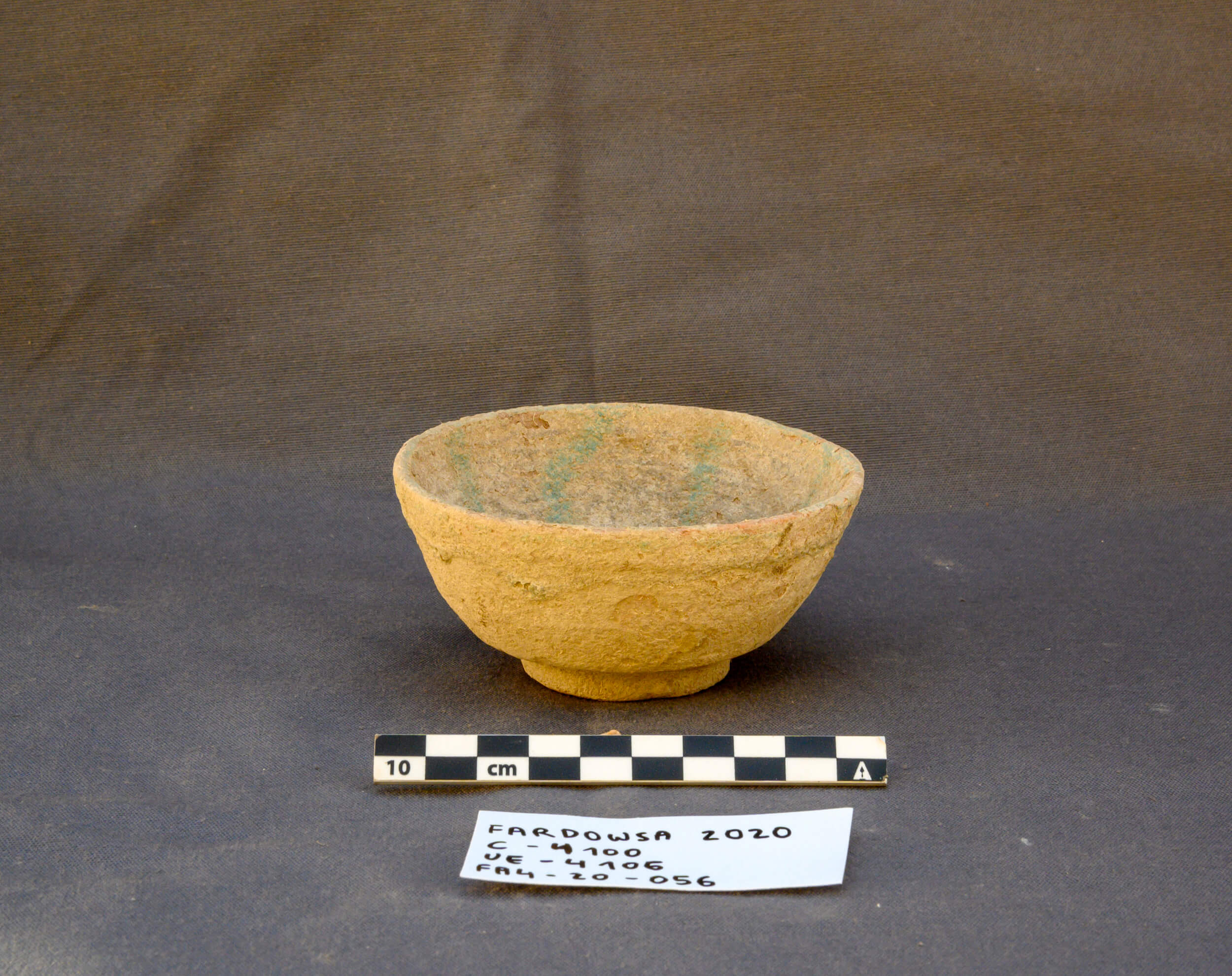 Left: Wall of the fort that protected the caravan station of Qalcadda ©Incipit Archaeological Project in Somaliland. Right: glazed bowl found at the town of Fardowsa, probably coming from Middle East or Persia. ©Álvaro Minguito.


The archaeological study of the trade networks will be complemented by the analysis of written texts. Thus, Chinese, Arab, Persian, Portuguese and Ethiopian texts inform with more or less detail about trade in the Horn of Africa; they are especially useful in order to learn which goods and commodities were imported and exported to and from the region. From these texts we know that in addition to the artifacts found in the excavations (mostly pottery and porcelain vessels and glass objects and, more rarely, soft stone and metal pieces) many other products were traded in the Horn of Africa: myrrh, frankincense, animal hides, slaves, ostrich eggs and living animals, among others, were exported, while clothes, oil, wine, weapons and manufactured goods were imported.

The system which had been running for millennia came to an abrupt end in the 16th century when the Portuguese expansion in the Indian Ocean severely disrupted the network of trade routes that for centuries had connected key economic areas, thus preventing sea travel from being conducted normally. The showdown between the Ottoman and the Portuguese seaborn empires found one of its major theatres of action in the Red Sea and the Horn of Africa: in 1508 Socotra was occupied by the Portuguese and in 1517 the same actors attacked the city of Zeila. At the same time the Portuguese provided support for the Christian Ethiopians (also Abyssinians) in their war against the Sultanate of Adal. The Oromo expansion from the 16th century onwards and the defeats endured against the Abyssinians weakened the Muslim states, which could no longer offer a safe environment for trade. Therefore, the network of towns and villages which had flourished in the 15th-16th centuries was progressively abandoned, and trade decreased dramatically although it never completely came to a stop. When, once again, it recovered, it was under very different parameters, as a part of the European-dominated colonial system in the 19th century. 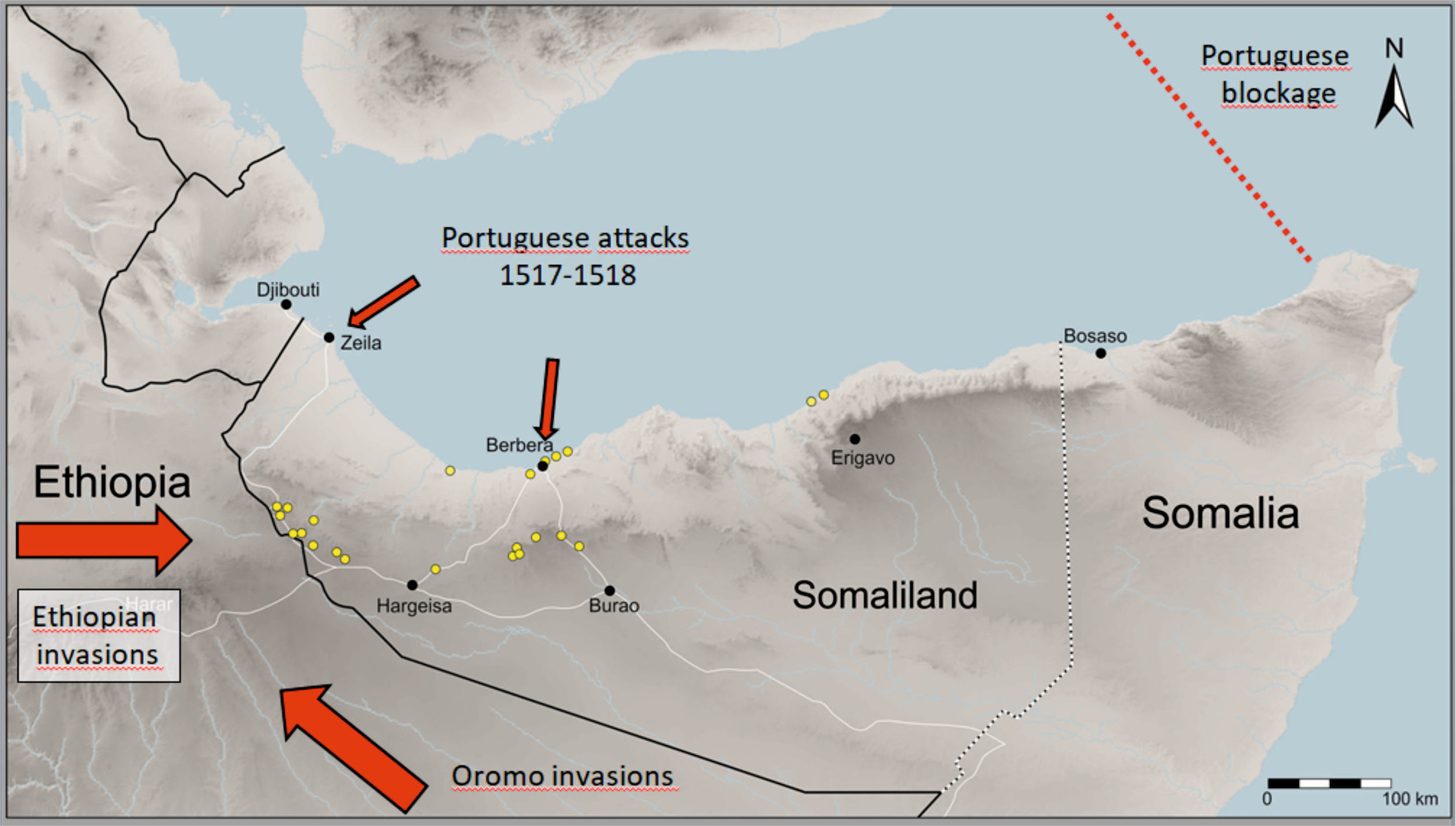 The collapse of trade networks in Somaliland.©Jorge de Torres.