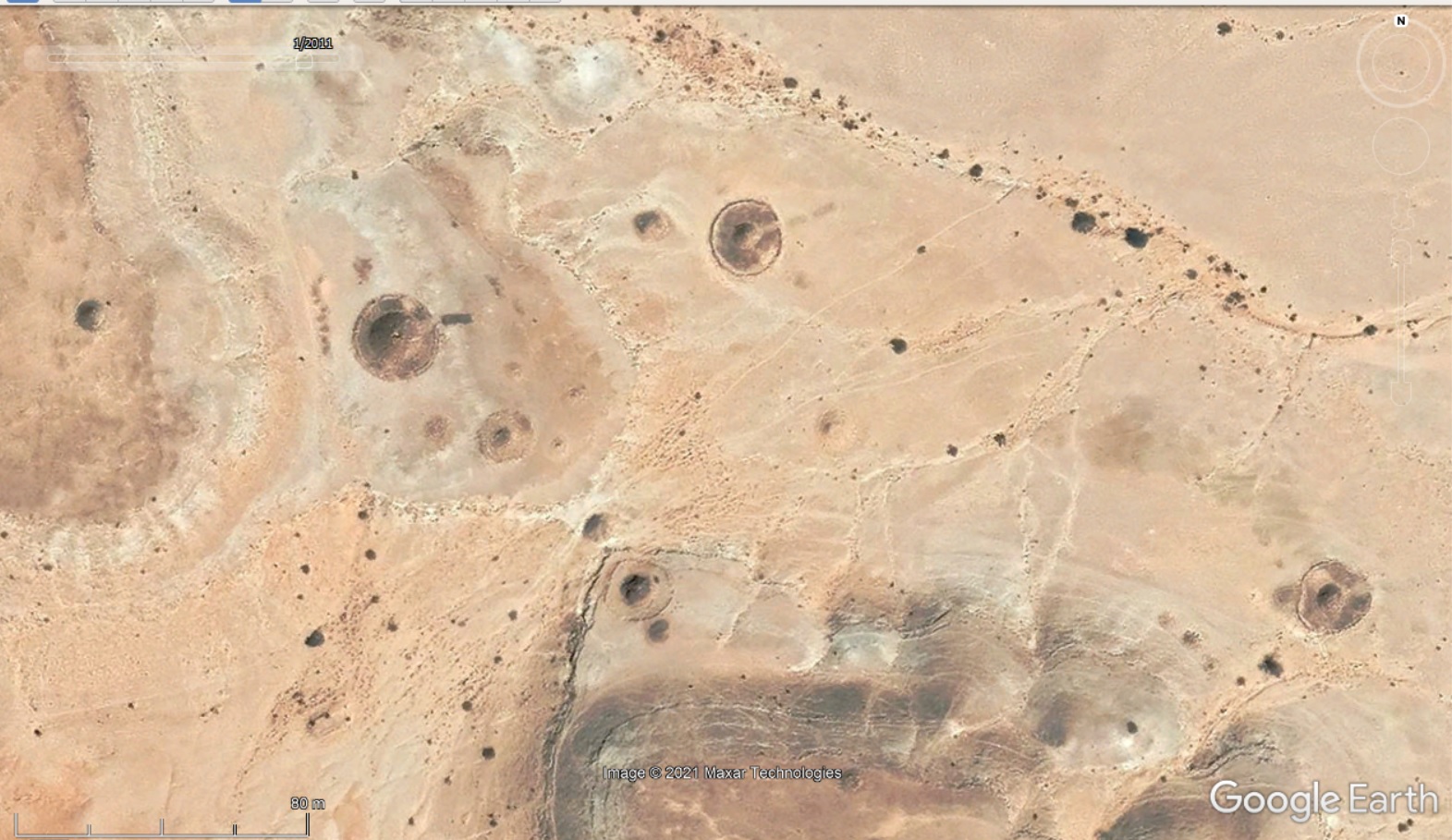 Remote sensing and the mapping of the north-eastern Horn of Africa.

Doing archaeological work in contexts like the Horn of Africa is not always easy; chiefly because often reaching remote areas on a regular basis is always not possible. Fieldwork is, usually, brief and very intense, designed to gather a large amount of data and visiting dozens of sites. Yet, distance is just one among the many obstacles encountered, which include the uncertainty of being able to work repeatedly in specific areas, climate hazards and, in the last two years, epidemics like COVID-19. In short, working in the Horn of Africa means having to face these difficulties and being always ready to seek alternatives and solutions. It is against this backdrop that the COVID-19 pandemic broke up and seriously hampered our work of the Spanish Archaeological Mission in Somaliland. The severity of the global pandemic and the travel restrictions enforced, made carrying out archaeological campaigns on an annual basis, as it had been done in the previous six years, not possible. This situation pushed us to seek alternatives in order to acquire archaeological data even without being able to go to the field. One such alternative has been the use of techniques such as remote sensing and the analysis of satellite imagery for the mapping and understanding of the archaeological record.

We can define remote-sensing as the general method of obtaining information of a phenomena or objects without having physical contact with them. This method is applied by different and numerous techniques. One of them, and among the most used, is photointerpretation, which focuses on the analysis and the interpretation of images, for example satellite-aerial images. The first use of photointerpretation for archaeological analysis was carried out in Europe in the early twentieth century and, as a consequence of the developments in aviation since the end of the First and the Second World War, it has been gaining popularity. The use of photointerpretation is crucial in subdisciplines such as landscape archaeology, and it is also as a very powerful tool for the location of archaeological sites as well as for the understanding of the history of the present landscapes. When applied to the huge forested areas of central Europe, however, this technique has huge limitations, which can be partially curbed by the use of alternative tools such as LiDAR or 3-D laser scanning. Yet, such is not the case of north-eastern Horn of Africa, where vegetation is scarce and widely scattered and sedimentation limited. Furthermore, the excellent contrast of the pictures and the chromatic contrast of sites such as cairns, tombs and forts, characteristics of the archaeological record produced by the nomadic societies, make them very visible to the human eye. These unique features make of this area the perfect laboratory for the mapping of archaeological sites using images. 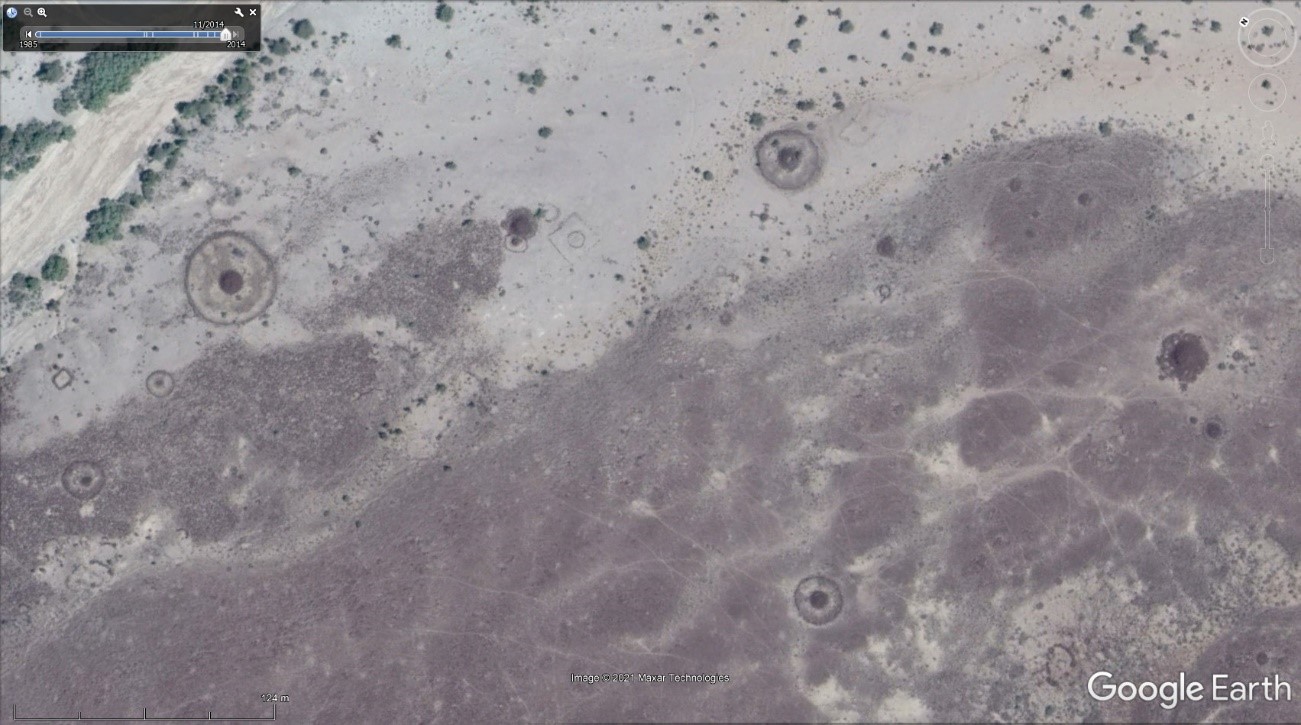 Satellite image of a site in west Awdal (Somaliland), where different kinds of structures, like simple and ringed cairns are recognizable. Source: Google Earth Pro. 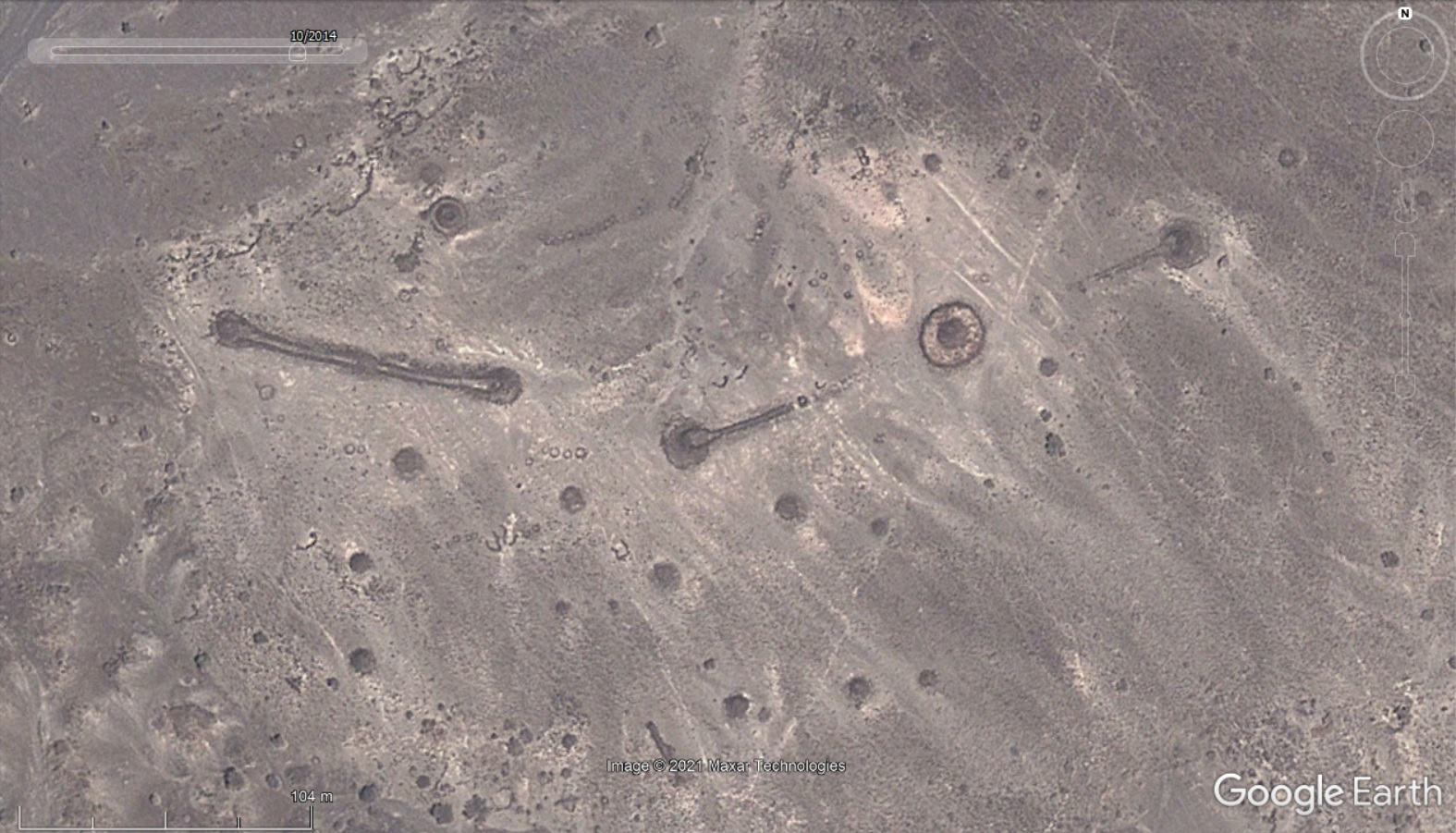 A couple of alignments in the region of Obock, Djibouti. From the protohistoric times, nothing is very much known about these structures, surrounded by mystery. They could be found close to rivers and, generally, they indicate the direction the flow, but further analysis is required. Source: Google Earth Pro

So, how do we start the archaeological survey of Somaliland using satellite imagery? Firstly, we need to select our software. There are plenty of options available, but perhaps the most complete is Google Earth Pro, due to its versatility and to the availability of historical images. Once the program has been installed the next step is getting acquainted with the pack of satellite images embedded in the program. It is important to realize that different photos possess different characteristics. For instance, the pictures that were taken in summer seasons are more luminous, whilst those taken during other seasons present more contrast and darker colours. Moreover, sites like cairns vary from region to region due to the characteristics of the terrain (e.g. in western Somaliland cairns are built using dark volcanic rocks that make them highly visible). It is thus crucial to spend some time getting used to the images before mapping. In addition to that, it is of great help having had some experience in the field and knowing the location of some of the sites in the study area. Once we are acquainted with the program and with the imagery, we are ready to start the survey! The next step will be defining an area and selecting the more favorable images, those in which the sites, as a result of their contrast and sharpness, are more visible. Then, after setting the high of the camera, we begin the survey by adding points. During the survey I have been carrying out since the past year, I chose to mark every man-made structure I found, mainly tombs, mosques and cairns, which (apart of the ephemeral structures such as huts and shelters) are the most typical structures built by nomadic societies. 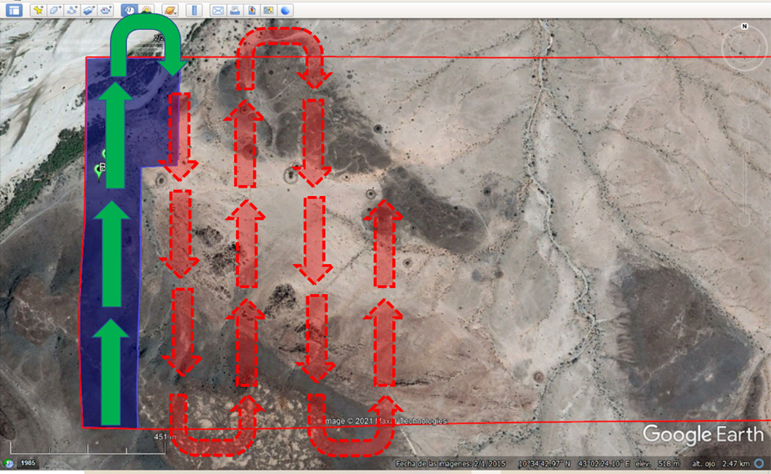 Process of mapping a cairn-field by doing transects over a defined area, in red. Source: Author’s composition. 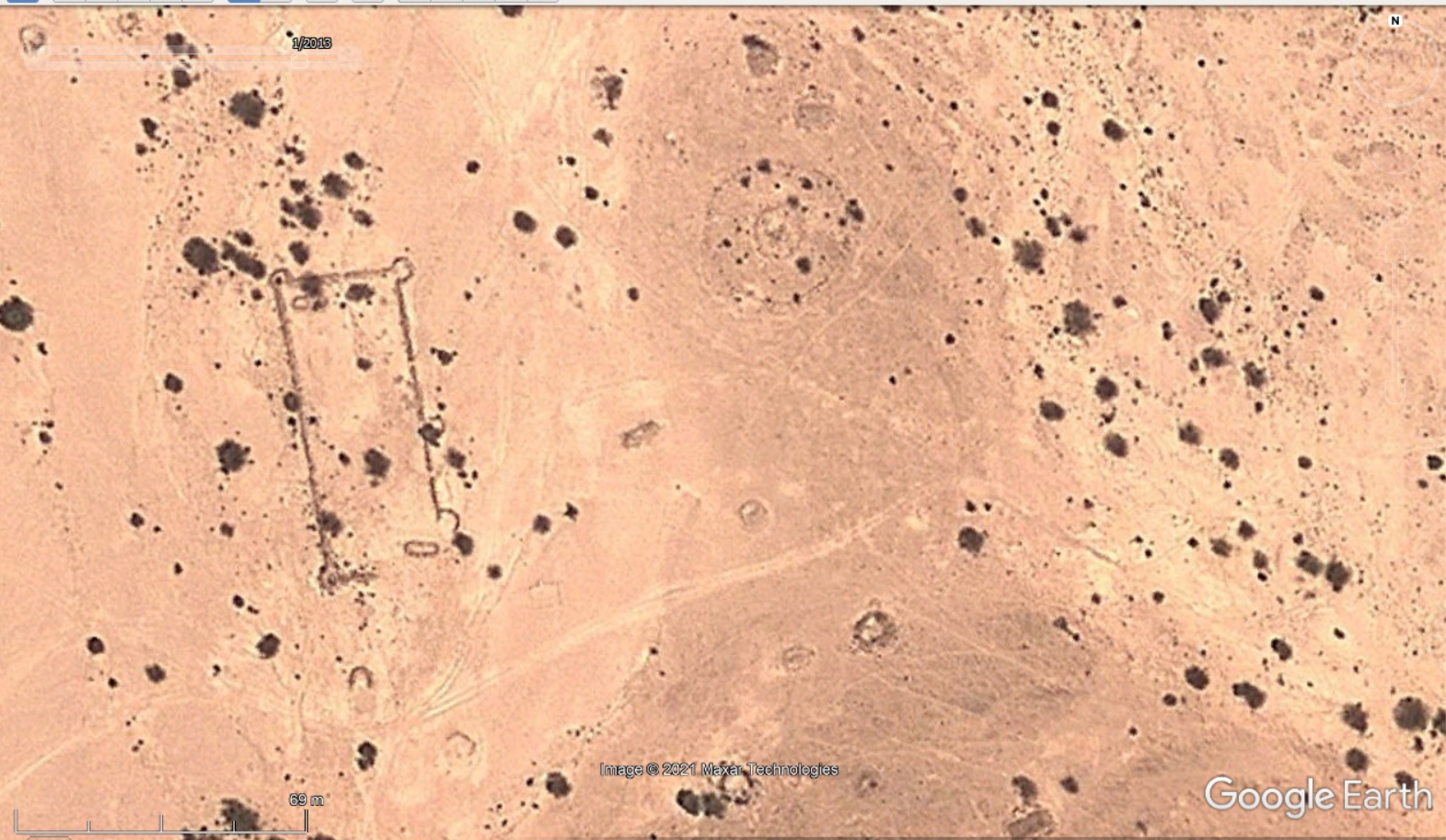 Not only cairns and tombs could be found, other structures like this caravansary in Sanaag (east Somaliland) are scattered over the field, although its presence is not so common. Caravansary are one of the key signal which determined the influence of the states in the region due to their role in controlling the territory and the trade in a region. Source: Google Earth Pro.

Left: A location in Ali Adde, Djibouti. Enclosures and mosques of hundreds of meters share the ground with other megalithic structures form the preislamic times, like the flower-shape cairn. Source: Google Earth Pro. Right: The previous site in Ali Adde after a complete identification of the structures. In purple the Islamic tradition structures are signalled, while the green dots indicate the cairns. Source: Google Earth Pro.

As a result of the use of satellite imagery I have been able to survey and map, until the present date, more than 300.000 structures, covering the southern part of the Eritrean coast, half of Djibouti, the eastern area of the Somali region in Ethiopia, the whole territory of Somaliland and Puntland. This work has thus expanded exponentially the number of archaeological sites hitherto recorded and mapped previously by other scholars (see Chittick 1976 and Mire 2015). I also decided not to limit my work to sites, so I recorded individual structures as well. With such a broad approach it was possible, I believe, to acquire a much better understanding of the landscape and thus lay the ground for future studies using Geographical Information Systems in the same area. My hope is that the complete database built by the study will be, in the future, used by researchers and the regional governments in the management of their heritage. 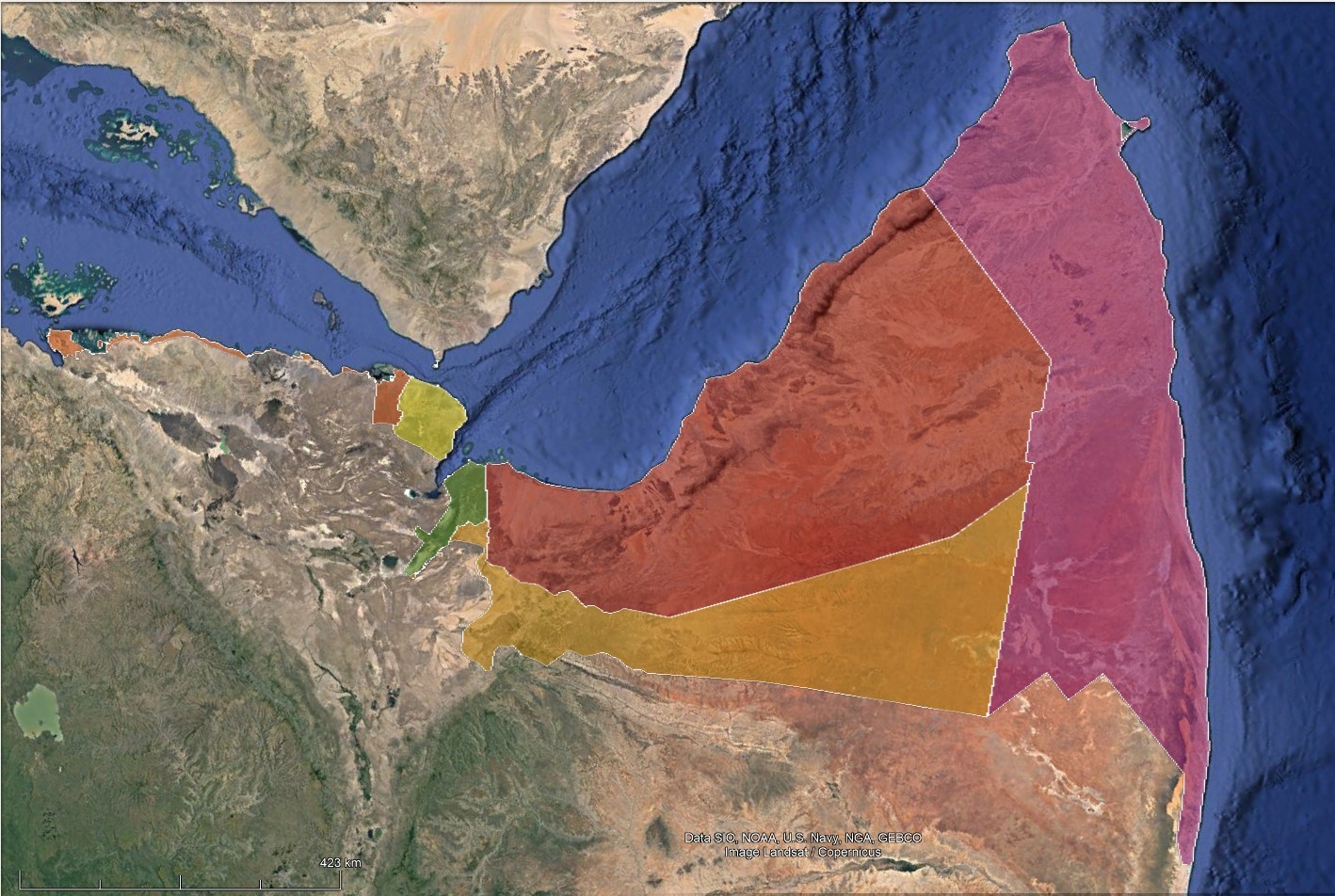 The results of the work have been rewarding. The study has helped us to develop a typology of structures of the Horn of Africa covering a wide chronology, thus complementing and expanding previous typologies (Davies 2013). Among the types of sites identified are cairns (stone, kerbed), mosques, tomb-mosques, ringed-tombs, caravanserais, sanctuaries, and crosses. Their location is everything but random and is helping us to better understand the past of the nomadic societies of the region. Thus, for instance, tombs appear very often clustered around riverbeds and in transit areas between ecological niches. This aspect informs us about the seasonal movements of the pastoralists. In addition, tombs appear also located along trade routes and on strategic mountain passes for the transit of caravans, which suggest interesting aspects about the territoriality of nomadic groups and the manner in which control upon seasonal resources, such as water and pasture, was exerted. In addition, the research is enabling us to learn about other crucial aspects of the past of the Somaliland region. One of them is the spread of Islam, which can be inferred from the distribution of Islamic tombs across the geography. Another is the processes and the strategies, such as erecting forts along migratory routes, employed by the states in order to guarantee their control over the nomadic groups and societies.

Although the work during the last year has been intense and the results rewarding, I consider the study to be far from completed. Indeed, in the following years I expect to add much more data for the analysis as well as to focus on some lesser-surveyed spots. The outcome will be, I hope, a complete and detailed mapping of the north-eastern Horn of Africa which shall grant us a much better understanding of the fascinating nomadic landscapes of the region.