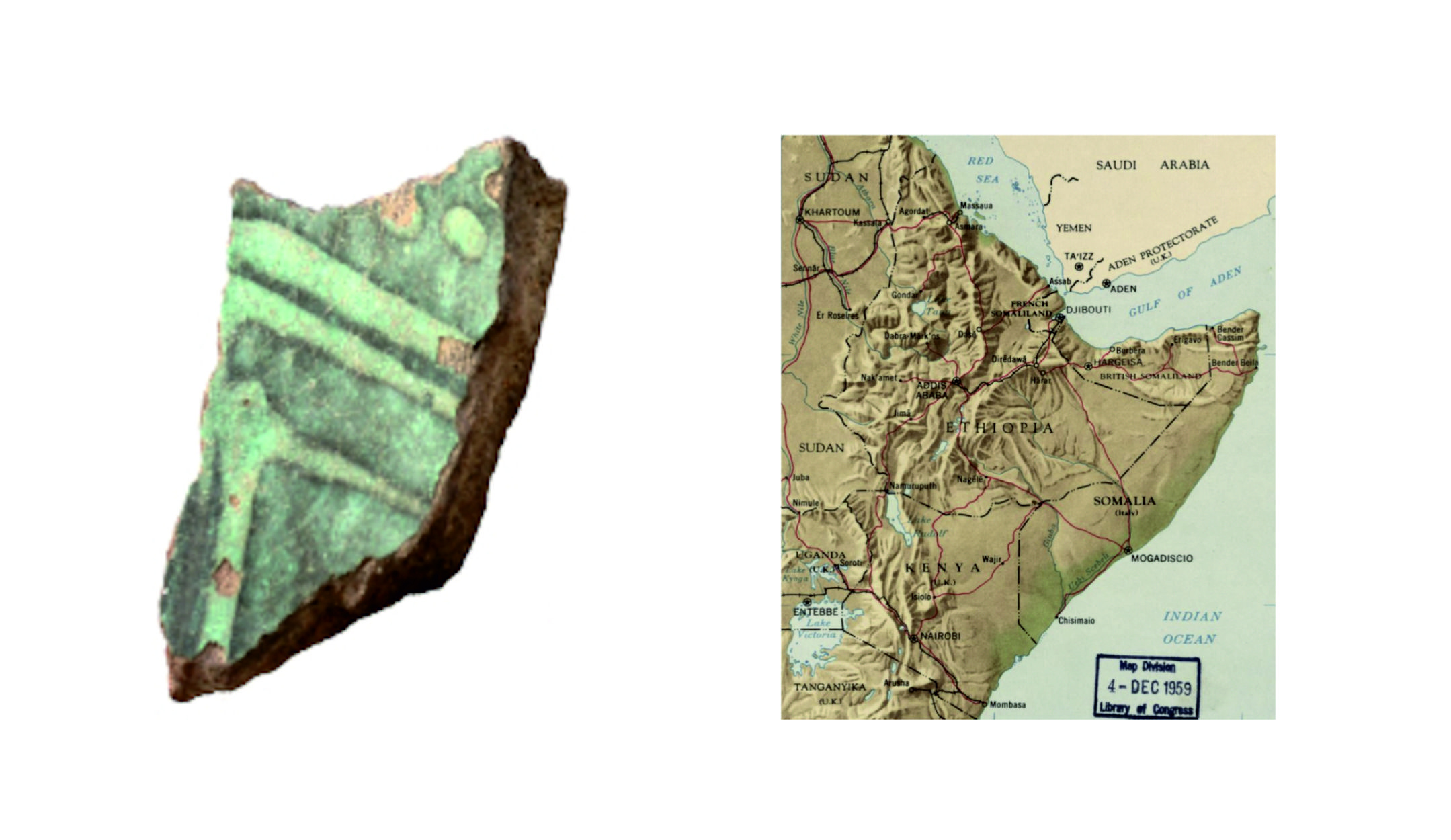 On the relevance of the shape

By Marta VeranoApril 19, 2021No Comments

Creating the brand identity and the website of Statehorn

We are glad to introduce us: we are Irene Sardá and Marta Verano and we form the small team that was chosen to create the brand identity and website of Statehorn.

The first time that we received an email from Jorge asking us if we wanted to work for an archaeology-related project we were thrilled. Then when we met María and Jorge himself and we heard further about the Statehorn project we got excited about the idea of joining such a team.

The process of creating the brand identity and website of the Statehorn was challenging indeed. From the point of view of design we knew that working with archaeological stuff was going to be tricky… but we were also certain that it was also going to be much fun: remains of ancient cultures and civilizations, forgotten traces of past societies, old maps carved with a myriad of different images and shapes…

The name of the project itself was a powerful one, embodying a whole set of meanings and goals, which corresponded to the rich and complex past of the societies of the Horn of Africa. Throughout the whole process of brand development we tried to convey that important aspect and this is why we decided to keep both the name and the symbol united.

We worked intensively with the amazing map collection that Jorge shared with us. The maps were extremely diverse, old and new, large and small, but all of them were beautiful and exciting to look at. We studied thoroughly their variegated designs, their lines, colours and shapes and this helped us immensely in developing the corporate identity of Statehorn. We were greatly inspired by two concepts that, we believed, embodied the spirit of the project: the ‘capricious’ shape of the Somali coastline and the topographical contour lines so profusely used in archaeological research.

The importance of the shape

One of the chief goals we set ourselves was that the final design had to represent visually the ‘horn’ of the Horn of Africa, that very geographical feature that gives name to this part of Africa and that is worldwide known. Indeed, the concept of the Horn became the most important aspect in the brand development. When discussing about this with María and Jorge, they explained us the importance of the concept of border not only for the Horn itself but also for archaeological research. Thus, one of the main materials found at archaeological sites are pottery and ceramic, which are typically recovered as sherds and as small broken pieces that feature a multiplicity of shapes. It will be chiefly by carefully studying the shape of these sherds that the archaeologist will be able to reconstruct the original piece.

So, similarly to how the shape of ceramic sherds and pottery enables us to reconstruct their identity, the clearly defined maritime border of the Horn of Africa helps us in understanding its overall shape, its identity, as well as its limits and its expansion potentials. 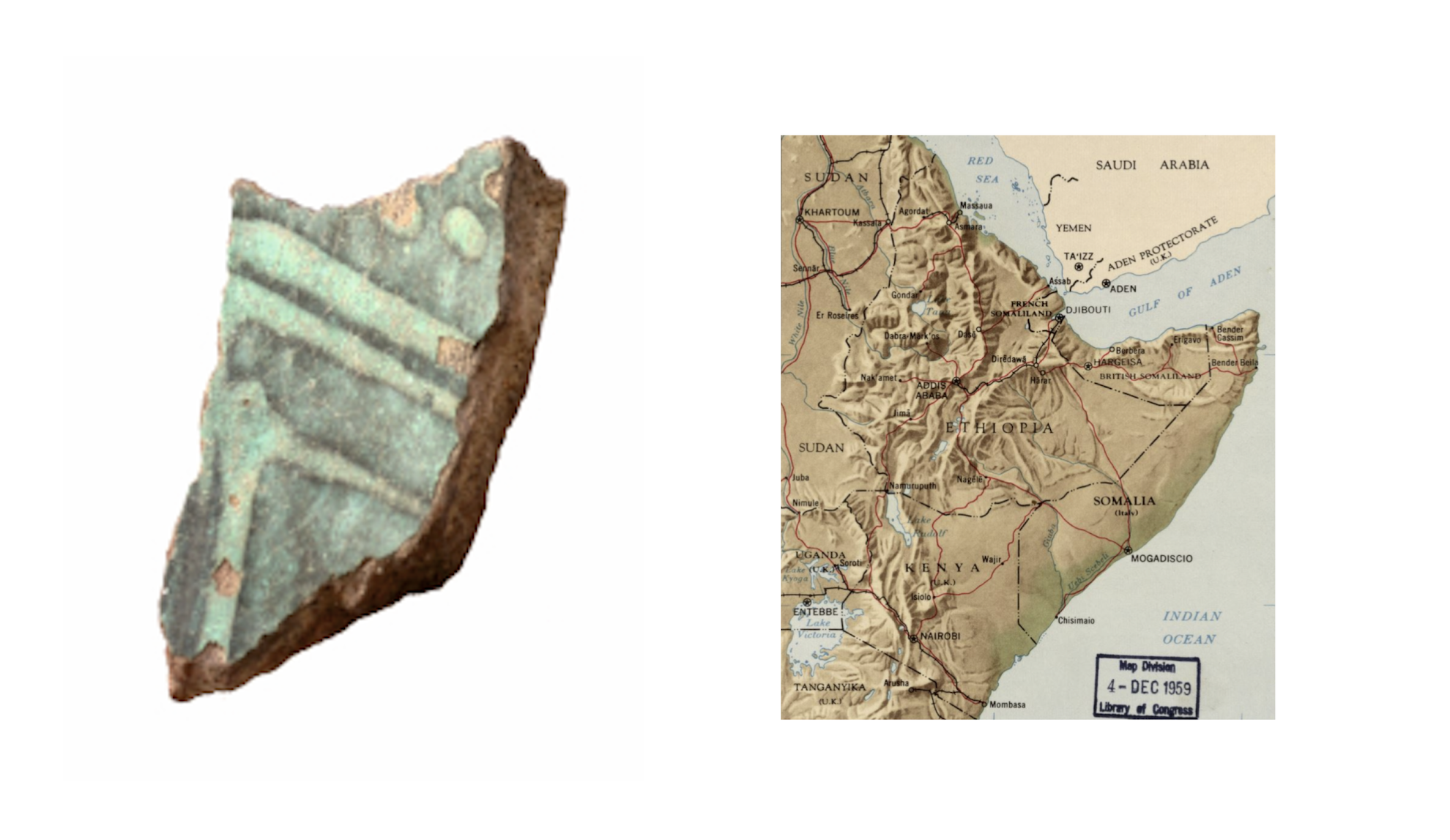 The contour lines were another key element in the design process. In cartographical design these lines reflect the variations on the terrain and they help us imagining its changing shapes and elevations. Inspired by the cartographic design, we created a group of lines of different colours and thickness imitating the coastal border of the Horn of Africa. Little by little the project logo was emerging.

The harmony and contrast of colours

We were convinced that the color palette had to reflect the personality of the project as well as the terrain and the material culture that are the focus of the StateHorn research. Once again mapping and cartography were excellent sources of ideas and inspiration for us: the satellite images of the Horn of Africa, with the splendid contrast between the blue of the sea and the brownish shades of the terrain, captivated our attention. Similarly, our palette also incorporated the terra-cotta shades typical of much of the ceramic recovered from the archaeological sites. 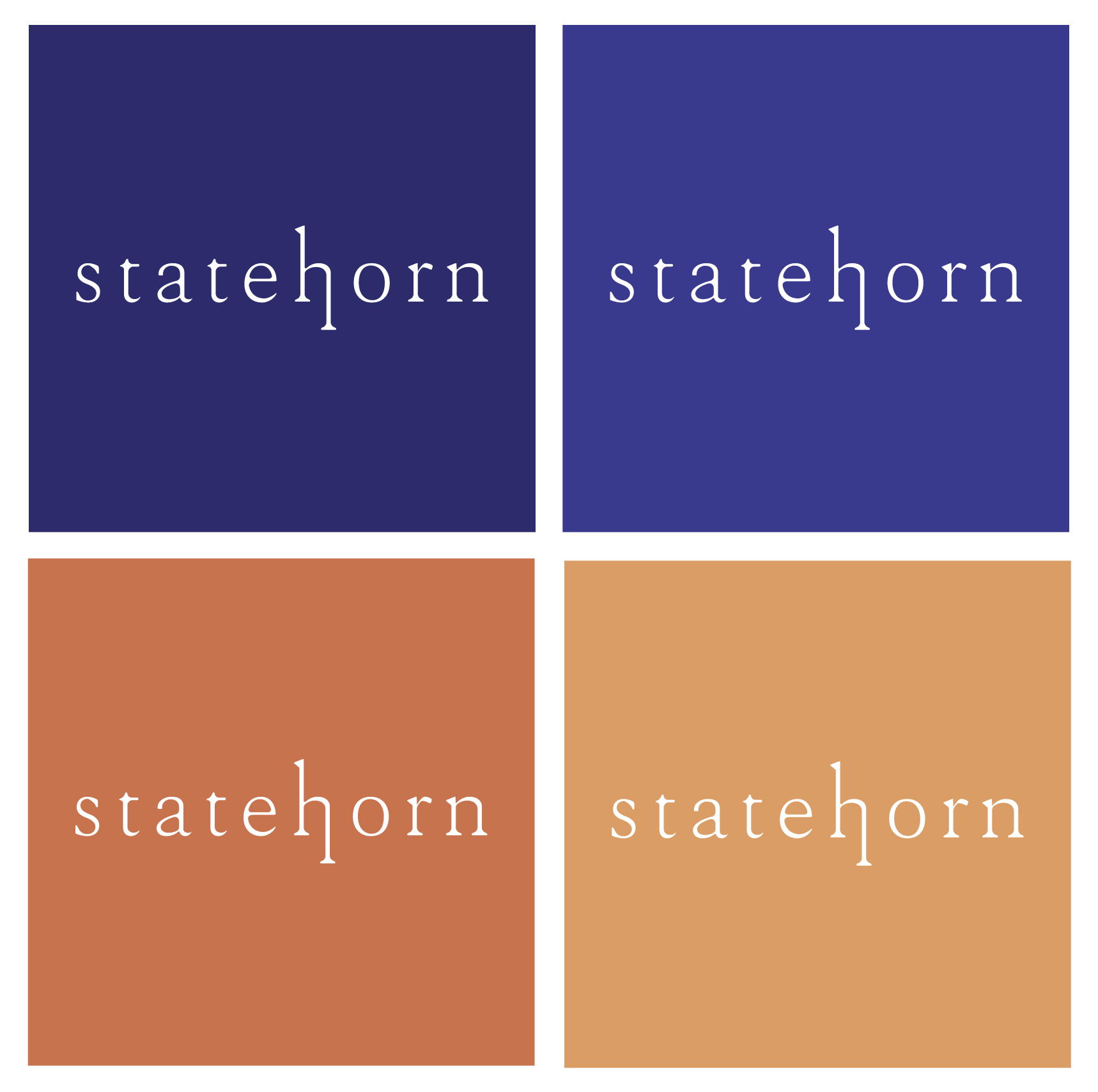 Once the identity of the project had been created, the next step was to figure out how the website should look like. We defined some fundamental guidelines for the future website of Statehorn. A guiding principle was that the website had to dynamically integrate the browsing and practical aspects with those aiming at explaining and communicating the project.

A simple and clear language and the Open Access system

We were adamant that the Open Access principle followed by the project had to be associated with a simple and clear language, which should be at the reach, not only of the academic circle of connoisseurs, but of all sort of viewers, including the non-specialists.

Getting lost vs getting overwhelmed. Browsing as an exploration

In our digital world information is often consumed in an impulsive way, sometimes without a clear goal or idea of where one is heading to. Even though the digital media is today an indispensable source of information, we believe that digital contents have to be carefully produced and presented in the right way. For this very reason we wanted that the users browsing our site were able to plunge themselves into the project whilst at the same time keeping a “digital track” that allowed them to know clearly where they were and where they were going to.

In the recent years institutions and museums worldwide have skillfully used their digital portals as platforms to reach out the public. Today, under the present pandemic, such a strategy is more important than ever. Virtual tours, interactive maps, images in high resolution of unique pieces help us in exploring the rich surrounding world without moving from our homes.

Similarly, we conceived the web of Statehorn as a window into the project. Indeed, the web had to offer the visitor a virtual journey across the project, allowing him or her to explore and learn about the history of the Horn of Africa and of Somaliland. An essential element in the design of this virtual tour was the use of the vast collection of images and other media produced by the Statehorn project. These spectacular images were crucial in helping enhance the aesthetic value of the website and in acting as true gates to the site’s inner layers.

Once the work was completed, we were captivated by the Statehorn project, by its different layers (political, social and cultural) and thrilled by the huge impact it will surely reach. Moreover, we got to befriend its amazing human team, formed by very skilled and committed people. All of this would not have been possible without the active support and constant help of María and Jorge.

Thanks a lot for letting us be a part of your team! 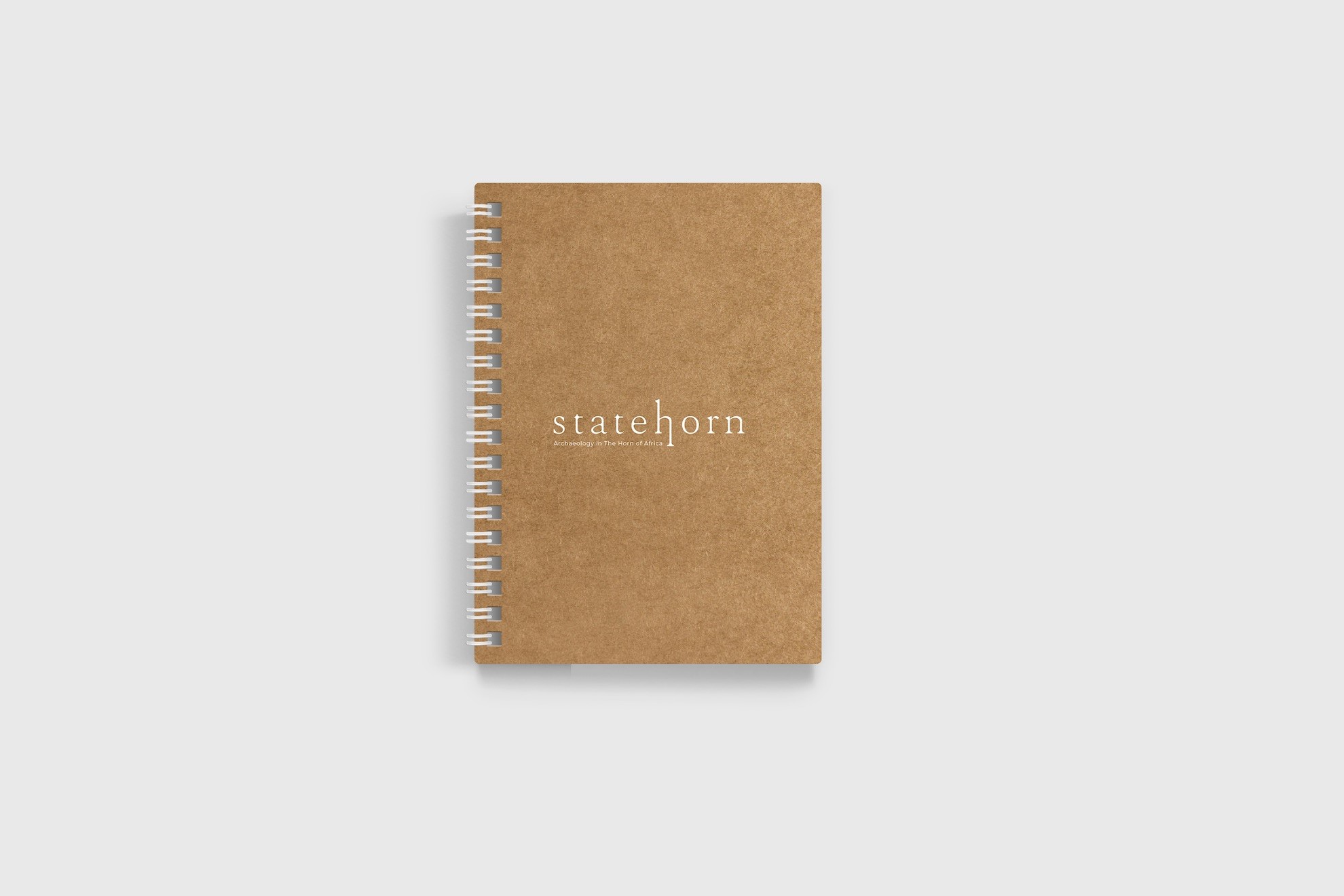 Sardá, Irene and Verano, Marta (2021). ‘On the relevance of the shape. Creating the brand identity and the website of Statehorn’, StateHorn Project, 19 April. Available at: https://statehorn.com/on-the-relevance-of-the-shape/ (Accessed: DD/MM/YYYY).