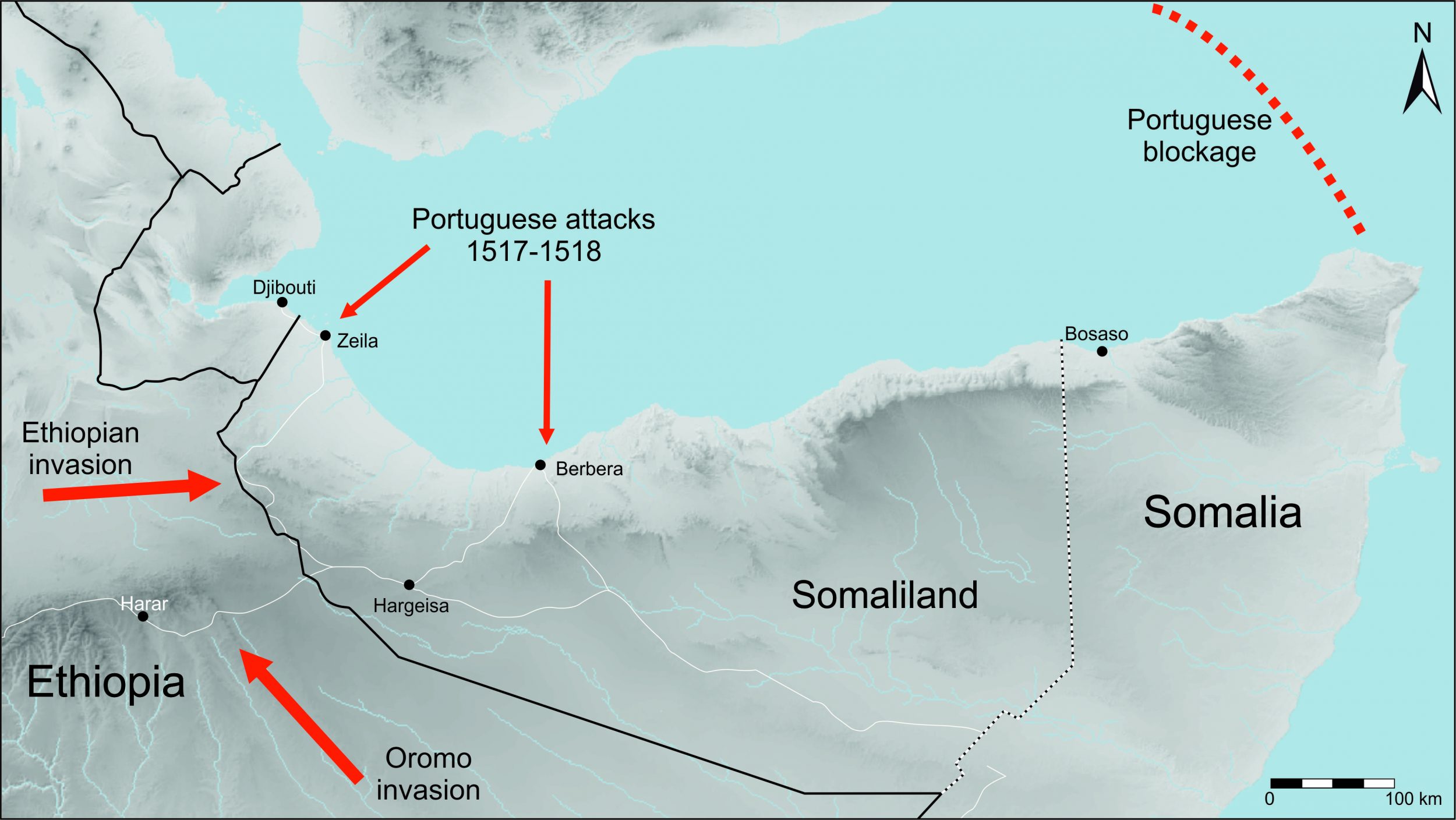 Western Somaliland in the Middle Ages

The reconstruction of the history of the Somaliland region from the 13th to the 16th century presents some challenges. The historical sources, either Arab, Ethiopian or European, that refer to this region are relatively abundant. Yet the majority of texts describing the wider Somali region focus largely on two areas, the regions to the south of the Ethiopian highlands and the cities and sites along the coast that had been visited by Arab and Portuguese sailors. The interior of Somalia is barely sketched out in the literature  and the city port of Zeila is frequently portraied as one of the most important centres in the Red Sea region and, sometimes, even as the capital of some of the kingdoms that ruled the region. In addition, while shedding important light on the political and military conflicts that for centuries had opposed the Christian kingdom of Abyssinia with the neighbouring Muslim principalities, these texts were rather vague in terms of informing about the organization of the Somaliland territory, its economic base and the groups (ethnic, tribes, languages) that inhabited it during this period.

From a wider perspective, Somaliland was closely linked to a series of Muslim principalities that emerged since the end of the 9th century to the south and east of the Ethiopian highlands (Braukämper 2002: 12). The process of islamization of these principalities probably followed the trade routes linking the coast of the Red Sea with the interior of the Horn of Africa (Fauvelle-Aymar2004: 42). The texts written by Arab authors provide a general if inadequate outline on the history of the region. They describe (Cerulli 1941: 9, 13) how by about 1285 AD (684 H) the Walashma dynasty of Yfat (sometimes “Awfat” in the sources), under ‘Ali bin Wali Asma’, became the major political actor in the region although its sovereignty over the area was thereafter to be challenged by the neighbouring Christian kingdom of Abyssinia (Braukämper 2002:25). According to Braukämper (2002: 27) by 1300 Yfat controlled several Muslim principalities and extended its dominion as far as the Somali coast. In spite of these hints found in the sources, detailed information about the Somali region is hard to come by. The early history of the Yfat kingdom was marked by an increasing tension with the Abyssinian kingdom, which concluded in 1415 when the sultan Sacdaddin was killed in Zeila by the Ethiopian king Yeshaq and the Yfat territory was occupied. 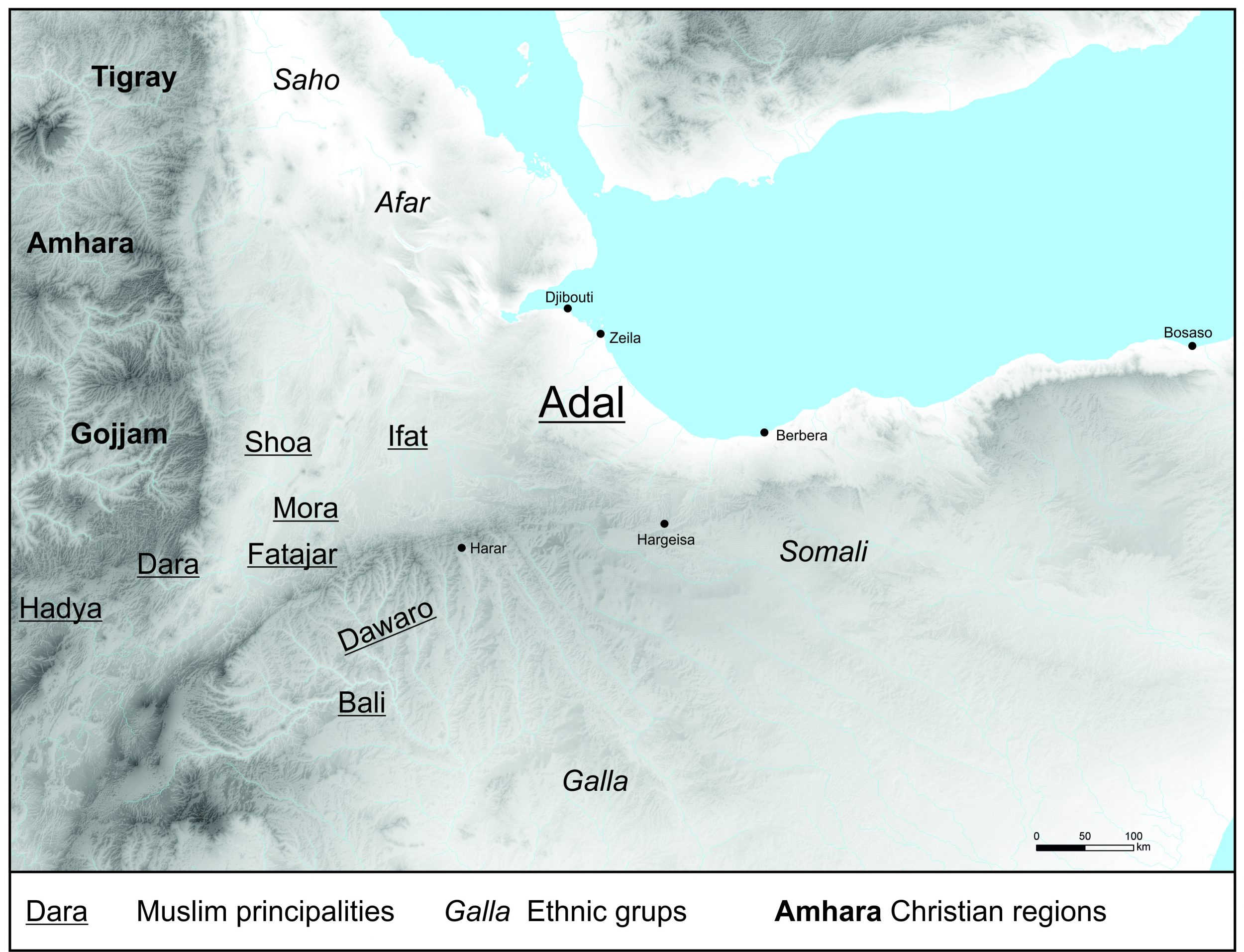 Political and ethnic entities in the medieval/modern Horn of Africa ©Jorge de Torres.

The Abyssinian occupation was to be, however, short-lived as soon afterwards a new kingdom –the sultanate of Adal- was established, encompassing all the previous Ifat territory and extending up to the Cape Guardafui (Braukämper 2002: 31).  The history of the more recent Sultanate of Adal is better known thanks to the Ethiopian chronicles and to the contemporary biography (Stenhouse 2003) of its most important leader, Ahmed ibn Ibrãhim al-Ghâzi, better known as Ahmed Gragn or the “left-handed” (1506-1543). Ahmed “Gragn” unified the Muslim territories and from the late 1520s to the early 1540s led a ruthless jihad against the Christian kingdom of Abyssinia, which led the latter to the verge of annihilation. However, the death of Ahmed Gragn in 1543, the blockage of the trade routes by the Portuguese control of the Red Sea Straits (Trimingham 1952: 77) and the expansion by the Oromo tribes moving north and eastwards led to the rapid decline of the sultanate of Adal and its eventual collapse by 1577 (Braukämper2002: 32).

Collapse of the Sultanate of Adal in the 16th century ©Jorge de Torres.

The history of the Sultanate of Adal is well known thanks to the Abyssinian chronicles and the biography of its most important leader, Ahmed ibn Ibrãhim al-Ghâzi, better known as Ahmed Gragñ or the “left-handed”

Considering the importance of Zeila and the trade routes connecting this town with Harar, it is surprising how few references to western Somaliland are found in the Ethiopian, European and Arab texts (Braukämper 2002: 32-33). Thus, the historical literature offers no descriptions of any city or village from Western Somaliland apart from the few Portuguese references to Zeila (Barros 1777: 54-61), Berbera and Mayt. Moreover, the mention to a “land of Sacd al-Dîn” within the Sultanate of Adal (Trimingham 1952: 75) is so vague that it could be meant to refer to the immediate area east of Harar or instead to encompass parts of Djibuti and Somaliland. Similar gaps apply to our knowledge of the past of the Somali peoples. The term Somali appears for the first time in an Ethiopian text in honour of Ethiopian ruler Yeshaq (1414-1429) (Lewis 1966: 30). Thereafter Somalis will be typically differenciated from other Muslim groups within the Sultanate of Adal and presented, in the biography of Ahmed Gragn, as warlike but troublesome (Stenhouse 2003). In the region of Harar the Conquest of Abyssinia representes them as a foreign group (Stenhouse 2003: 102), while their original extension or habitat within the Somaliland region is still a matter of debate. Some texts seem to indicte that Somalis lived within the territory of the sultanate (sometimes acting as bandits), but that they were far from being the dominant group (Stenhouse 2003: 28). Moreover, the regions farther to the east seem to have been entirely under Somali control, as the visit of Ahmed Gragn to the chief of the Marraihan clan to recruit troops for his jihad seems to imply (Stenhouse 2003: 44).

The lack of historical sources about the Somaliland territory contrasts with the numerous archaeological remains that are scattered throughout the region and that have been found during recent survey and in-depth campaigns. Many of these remains can be confidently dated to the period of the Sultanates of Ifat and Adal. The first recorded description of the rich archaeological heritage of the area dates to 1854, when the explorer Richard Burton (1894: 139) during his travel to Harar described some ruins he had encountered. Yet, the first archaeological work proper was made by Alexander T. Curle, who identified twenty archaeological sites, most of them in the region of Borama or close to the route between Zeila and Harar. On the basis of imported materials found during the excavations, Curle dated these sites to the period of the Adal sultanate (Curle 1937). Curle’s pioneer work was continued by Huntingford (1978), who excavated a few more new sites. Thereafter and until the recent years no new sites were excavated, although a few documentation campaigns in Somaliland were carried out (Jönsson 1983, Fauvelle-Aymar 2011, Mire 2015). It is only recently that the first comprehensive study of the archaeological settlements of Somaliland has been launched by the Incipit Archaeological Mission (González-Ruibal et al. 2017, Torres et al.  2018, Torres 2020).