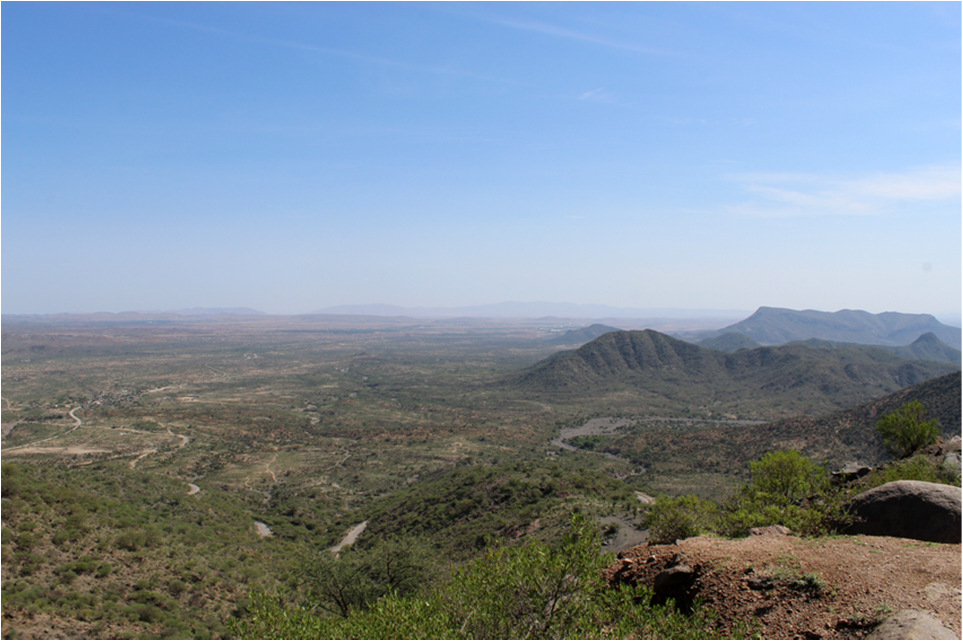 The Geography of Somaliland

The geography of Somaliland –and to some extent, of the wider Somali area- can be divided into three main, well-differentiated geographic areas: Guban, Ogo and Haud. The first one, Guban, corresponds to the desert coastal plain (the name stems from the Somali word gub, ‘to burn’), running from the French Somaliland, where it reaches an extension towards the interior of 95 km, to the Cape Guardafui, where in some cases it is compressed to just 200 meters (Hornby 1907: 3). The Guban is a desiccated area which only receives scattered rain during the –relatively- cool months of October to March. Yet, as the presence of numerous tug (seasonally dry riverbeds) crossing the coastal plain indicates, sporadic episodes of floods provoked by heavy raining in the highlands can also occur. These seasonal episodes of rain are the cause of water being relatively abundant in the Guban, thanks to shallow-wells that can be easily dug to get the water contained below the sandy topsoil (Lewis 1999: 33). 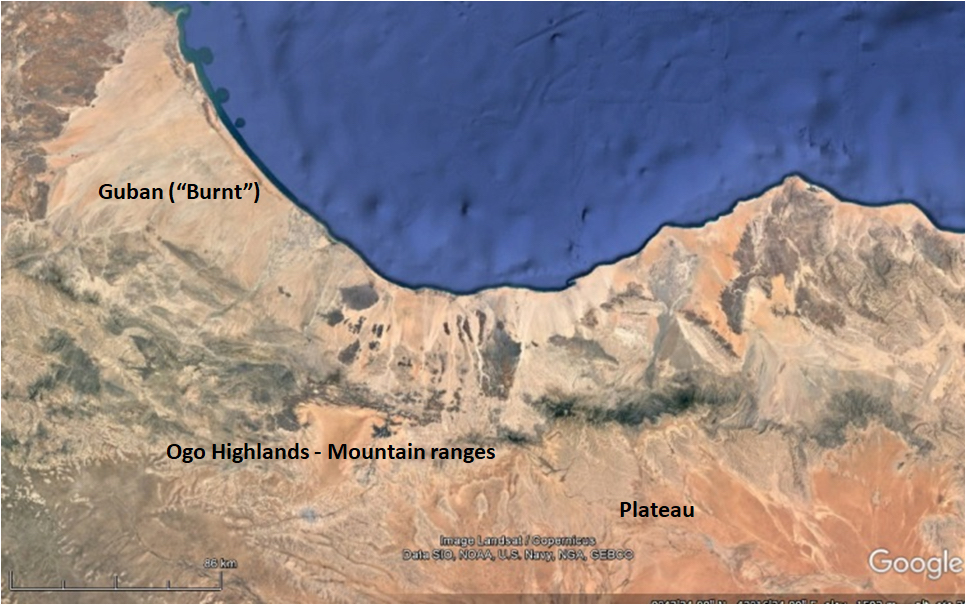 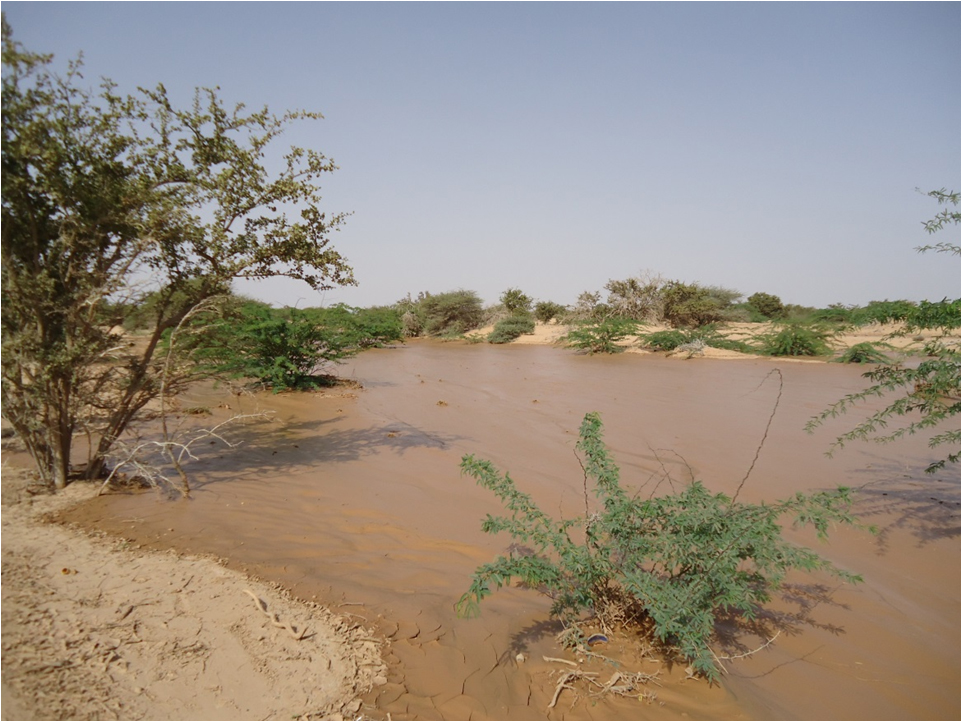 Behind the Guban lie a series of mountain ranges generically named the Ogo highlands, extending southwards from the escarpments which limit the Guban to the border with Ethiopia, and running parallel to the coast until the Cape Guardafui. These series of mountains reach their highest altitude at the escarpment’s edge (about 2400 meters in the Erigavo region). Although rainfall varies with altitude it is enough to sustain limited agriculture to the west, and in general the Ogo highlands can be considered well watered throughout the year (Lewis 1999: 33). To the south, the Ogo highlands slope down gradually to the Haud, a plateau which constitutes the main grazing area of Somaliland and a key element for the seasonal movements of the pastoralists. This region is characterized by red soils and, although lacking permanent water, after the rainy season it is covered by high grass which constitutes an excellent fodder for camels (Lewis 1999: 35). The Haud area is interspersed by valleys and natural depressions which after the rains turn into natural pools for several months, until they get dry and have to be abandoned.

“The geography of Somaliland –and to some extent, Somalia- can be divided into three main, well differentiated geographic areas, named Guban, Ogo and Haud” 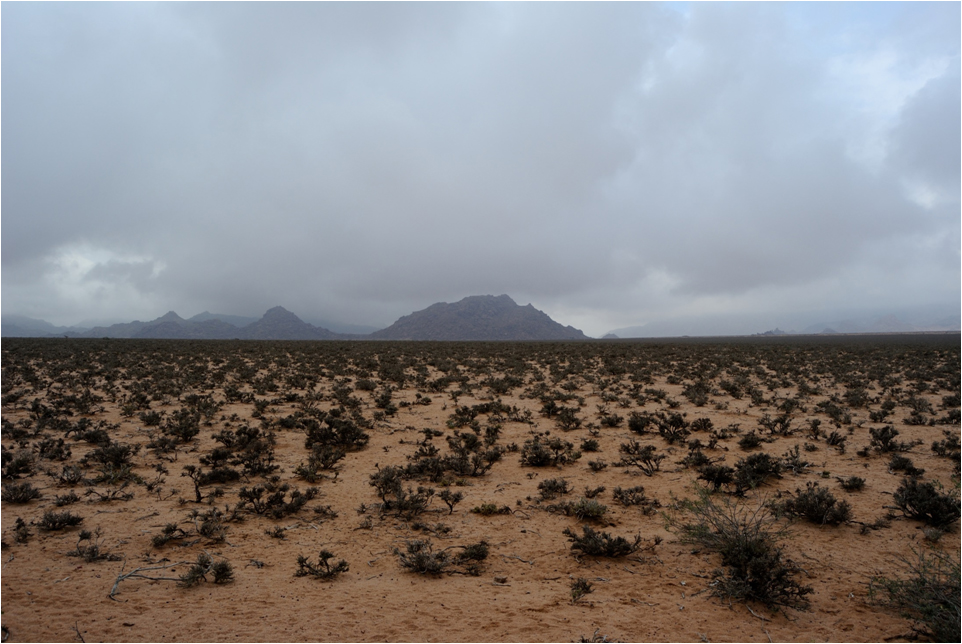 Guban plain, with the mountain ranges in the background. ©Incipit Archaeological Project in Somaliland.

Regardless of these geographical specificities, the environment in Somaliland is a challenging one, most of the country being considered a semi-desert region with poor and uneven rainfall rates and vegetation consisting mostly of scrub bushes and acacia trees. In this context, a central survival strategy for the pastoralists is that of following an adequate pattern of seasonal movements which allow them to take the best advantage of the challenging environment. This strategy is directly related to the annual rainfall cycle that renders, temporarily, some areas suitable for human life. Somaliland has four seasons (Hornby 1907:75): the main rainy season(Gu), which occurs around April-May; the dry season of Hagaa running from June/July to August/September, the autumn rains (Dayr) around September/October to December and the harshest dry season of Jilaal (January to April/May). These seasons have a variable impact upon the different geographic areas of Somaliland; for example, in the Guban area the autumn rains -Dayr- are usually heavier than the rains during the Gu season. Yet in general the rains determine a very strict pattern of movement for the Somali pastoralists.

View from the Sheikh pass. ©Incipit Archaeological Project in Somaliland.

The annual cycle starts with the Gu rains in April, when the groups wintering in the Ogo and northern Haud regions move to the south to take advantage of the new grazing areas which will shortly grow. So, following scouts, the groups will move their herds to the southern Haud and therein establish temporary camps whilst moving around the area as the grazing becomes more and more scarce. At the same time, the groups stationed in the Guban will move to the Ogo, filling the empty spaces left by the southern groups and benefiting from the comparatively cooler environment. After two or three months, the hot season (Hagga) will start and the grazing areas will begin to dry. Thereafter, the groups will begin to move progressively back to the north, although camels are usually kept grazing at longer distances –returning to be watered in permanent wells. This period of the Hagga is potentially a conflictive one: if the rains have been scarce in the south, the groups will come back to the Ogo highlands earlier and can find the northern groups still occupying the highlands. The pressure of these southern groups returning to their home-wells pushes the northern groups towards the coast, at a moment when the autumn rains (dayr) start to fall (Lewis 1999: 41). By the end of the dayr season, most of the groups will occupy their home-wells and prepare for the winter dry season, the jiilaal. At that moment, only the permanent wells contain some water, the Haud is deserted and, depending on the total amount of rain that has fallen throughout the year, subsistence can be especially challenging (Lewis 199: 41). With the arrival of the new rainy season in April the cycle commences again. 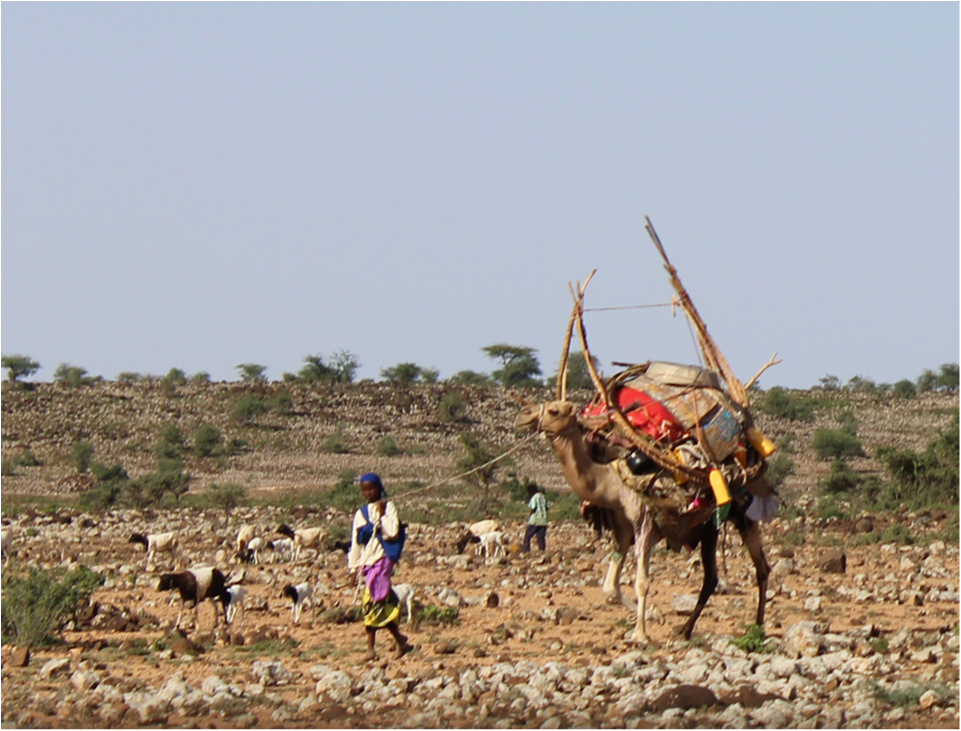 Nomads on the move. ©Incipit Archaeological Project in Somaliland.

Such an annual cycle of movements not only determines the economic life of the Somali nomads, but it also has a deep impact in their social life. Thus, for example, the Gu season is considered a season of plenty and joy, during which meetings and councils are called to discuss on political matters, to make sacrifices to the ancestors, to settle debts and contract marriages (Lewis 1999: 43-44). On the contrary, Jiilaal (the winter and driest season) is a harsh period when the progressive desiccation of the wells leads to conflicts over the scarce pasture and water (Lewis 1999:45). The overlapping system of Somali nomads has also an impact on the way in which landscape and territory are perceived. Only at the highest levels of supra-clan organization there is some degree of identification between the people and a certain territory. Smaller groups within a clan, in contrast, merge and overlap. There is no sanction on the use of pastures, and the right to graze relies on the effective occupation of the area and the capacity to repel enemies by force. Wells, on the contrary, are paramount in the nomads’ strategies and rights of use are established and made known to everyone, acting, as I.M. Lewis puts it, as “anchors” for the nomadic distribution (Lewis 1999: 49).

“The overlapping system of Somali nomads has also an impact on the way in which landscape and territory are perceived.”

As climatic conditions haven’t significantly changed during the last 500 years or so, the nomadic strategies regulating seasonal movements and access to water are today basically the same as they were during the medieval period. Therefore understanding these movement patterns is key to understanding the ways medieval nomads moved in the landscape and interacted with the inhabitants of the towns and villages scattered along the Ogo Mountains. Unlike pastoral life, the network of settlements which dotted the Somaliland region was severely disturbed after the collapse of the Sultanate of Adal in the 16th century. When urban life started to emerge again, it was under a very different pattern related to the needs of the colonial powers in the 19th century. Therefore, and quite paradoxically, the fluid movements of the nomads constitute the most permanent human feature in the region and can provide the foundations for any territorial study of the Somaliland region.