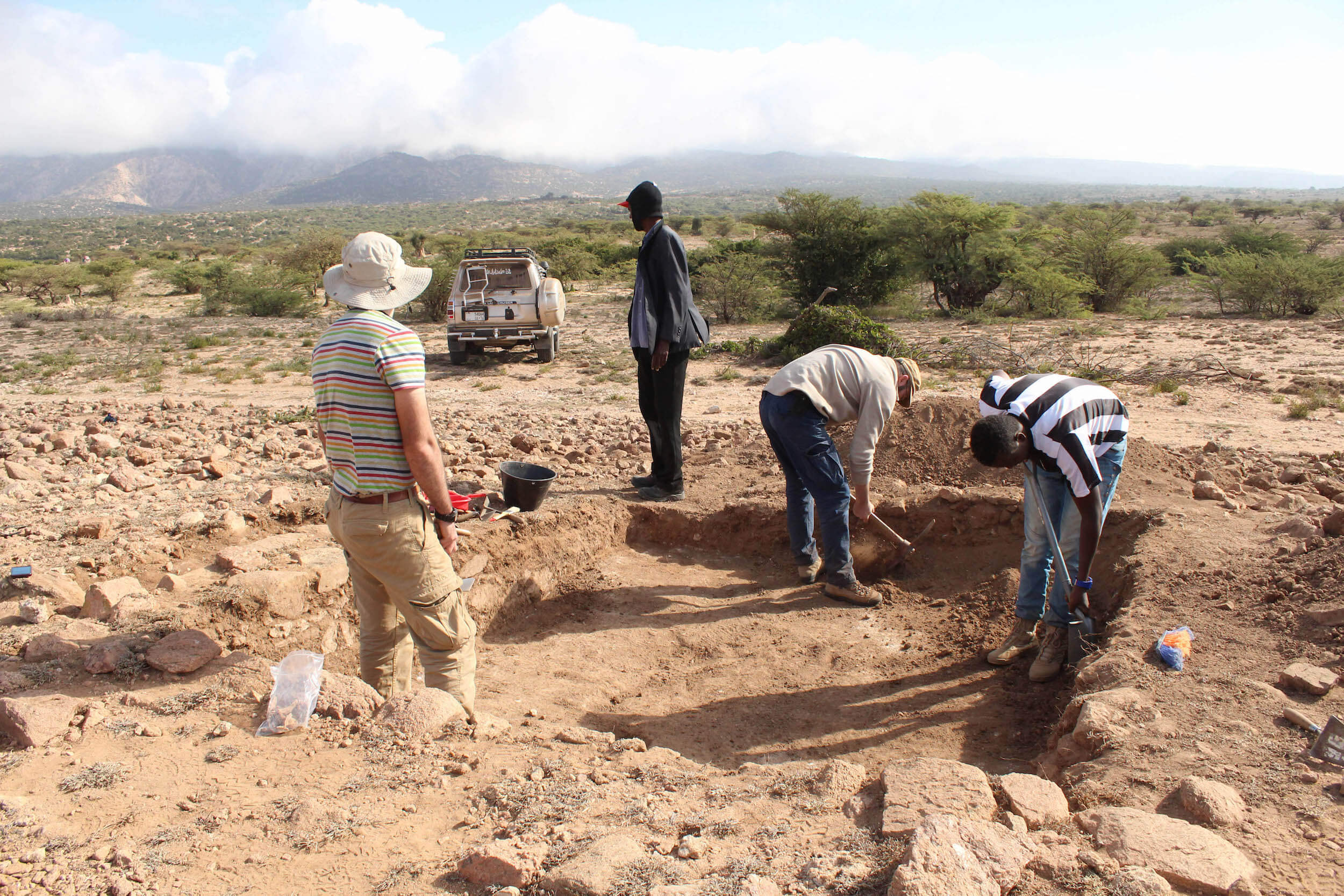 For thousands of years, the Red Sea has been an extremely dynamic area connecting some of the most important economic, cultural and political regions in the world, from the Mediterranean to India, Persia, China, Arabia and the African mainland. One of the axes of the network connecting distant civilizations and societies laid in the coast of Somalia, a region where cities flourished and became international trade hubs from at least the Hellenistic period onwards. Often identified as the mythical land of Punt described in Egyptian texts, famed for its frankincense and described by Greek sailors already in the 1st century AD, the history of Somalia in Classical Antiquity still remains obscure, as it relies on a limited set of excavations, the results of which were only partially published, and on the scarce information provided by the Classical Texts and epigraphy.

“The methodologies used included a significant use of archaeology and other material resources, as the epigraphic information of Muslim stelae found in the region”

Since 2015, a Spanish archaeological project of the Institute of Heritage Sciences (Incipit) of the Spanish National Research Council (CSIC) has been working in Somaliland, a self-declared independent region west of Somalia, studying the development of the trade routes from Antiquity to the 19th century. The objective of the Incipit-CSIC project in Somaliland is to understand the development of long-distance trade in the region and to assess the role of local communities during the first and second millennia AD. The chronological scope of the project is vast: from Antiquity to the 19th century; yet, all archaeological sites found during the fieldwork, irrespective of their chronology, are documented, including prehistorical and 20th-century historical sites. To the date, the Incipit-CSIC has conducted six field seasons in the country, amounting to more than three months of fieldwork in which is now the longest-running foreign archaeological project ever conducted in Somaliland. The project has documented thoroughly thirty-five important sites, conducting archaeological test pits in eight of them, and it has also recorded more than 600 funerary cairns. Hundreds of archaeological items have been inventoried, drawn and photographed, and when published they will constitute the largest sample of material culture ever studied in Somalia. 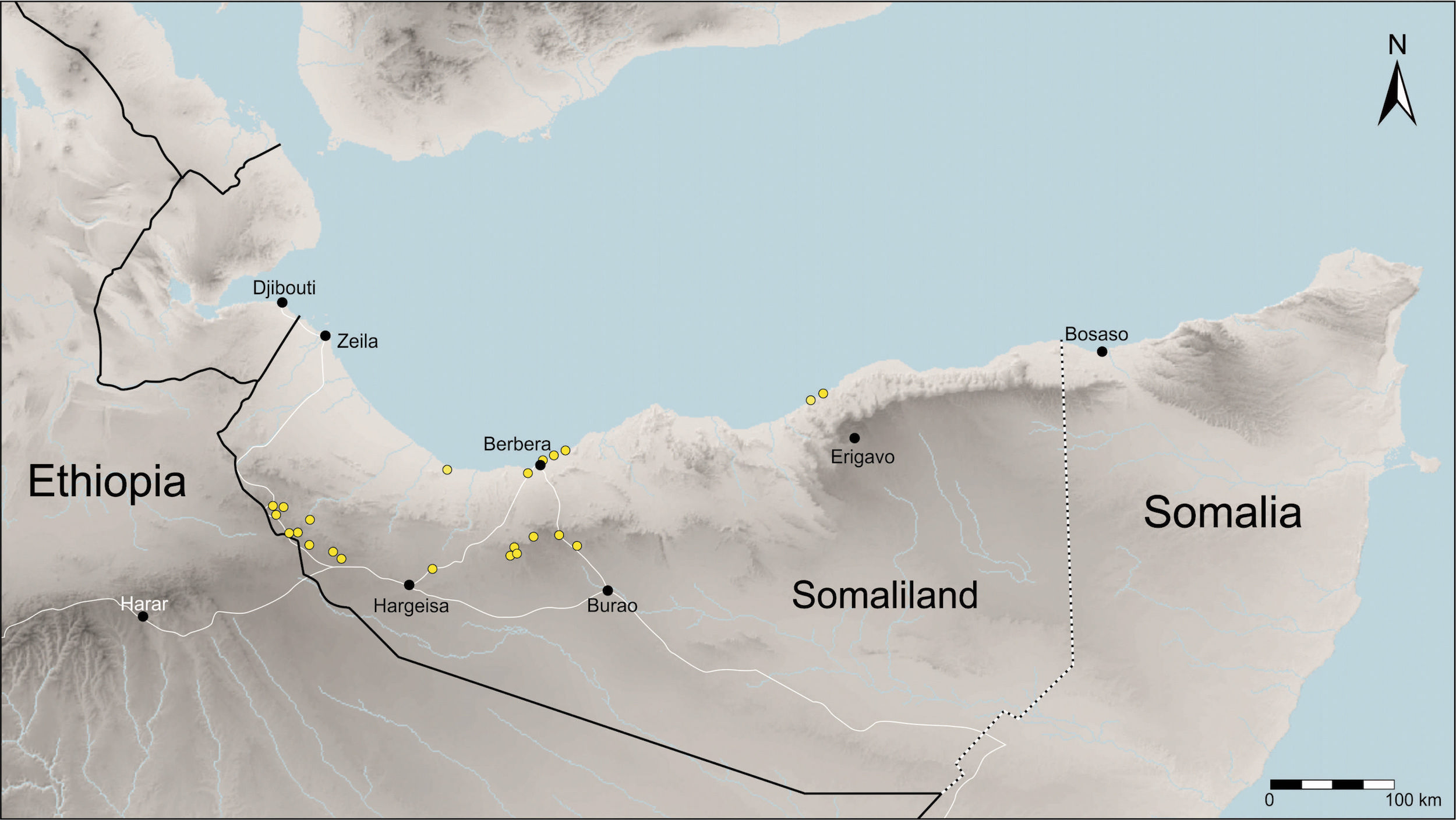 To the day, the Incipit-CSIC has conducted six field seasons in the country, totalling more than five months of fieldwork in which is now the longest running foreign archaeological project ever conducted in Somaliland.

The first field campaign carried out by the project consisted in a brief overview of the country with the aim of gathering information and evaluating the possibilities of conducting research in Somaliland. A few places, all of them well known, were visited, including Berbera, Dubar, Zeila, Fardowsa and Qorgab. The second campaign undertaken in 2016 combined work at the coast around the Berbera area (Berbera, Bulhar, Bender Abbas) and in the interior, where a wide range of medieval towns, caravan stations, and nomadic meeting sites were documented. In 2017 work focused on the town of Bulhar where a four-week excavation was conducted, complemented with surveys around Berbera and Borama. The 2018 campaign selected two main geographic areas: the coastal sites of Xiis and Maydh in the Sanaag region and the area around the village of Boon, to the north of Borama in the Awdal region. In the first area, an ancient site was documented which produced materials coming from the Mediterranean, Persia and India. In the second region of Awdal, five medieval sites of different sizes were comprehensively studied, including the important town of Abasa described by Richard Burton in 1854. In 2019, the Incipit Archaeological Mission in Somaliland focused on Heis, one of the most important coastal sites in the Horn of Africa during Antiquity. The promising results from this campaign brought the team to plan a second campaign in this site for 2020. However, the arrival of a typhoon to the coast of Somaliland forced a change of plans and the fieldwork was moved to the village of Sheikh, where an excavation was conducted at the Fardowsa site, combined with surveys in the Berbera and Burao regions.

Throughout all these years, an excellent relationship has been established between the project members and the Somaliland authorities and experts. The staff from the Tourism and Archaeology departments of Somaliland have always supported the project and facilitated the archaeological work. The Incipit Archaeological Mission in Somaliland has also supported the strategies followed by the Somaliland authorities and experts and the civil society at large, in particular their move towards a higher professionalization and a better preservation of the heritage of Somaliland. The support to such initiatives as the creation of a Department of Archaeology in 2018 or the Antiquities and Museums Act that will be approved by the Somaliland Parliament are two examples of the close relationship between the Spanish and Somaliland teams. In addition, the Incipit members give regular training in archaeological and curatorial skills to staff of the Department of Archaeology and are members of the Somali Association of Archaeologists founded in Hargeisa in 2018.

Working with Ayanle Abdirahman, Director of the Department of Archaeology of Somaliland and other members of the staff at the Ministry of Trade, Industry and Tourism. ©Jorge de Torres

During these past years, the Incipit Archaeological Project has become a kind of umbrella term that gathers several research threads, initiatives and teams that coordinate themselves to share information and resources. Currently, there are two main research threads: a project on trade in Antiquity directed by Dr. Alfredo González-Ruibal and the StateHorn project, directed by Dr. Jorge de Torres, which explores statehood during the medieval period (11th-16th centuries) and is partially based on MEDLANDS, a Marie Curie postdoctoral grant obtained by Jorge de Torres in 2018. These two projects and other initiatives will work closely together during the next years aiming at maximizing resources, coordinating activities, sharing information and working collectively to improve our understanding of the archaeology and history of Somaliland and the Horn of Africa. 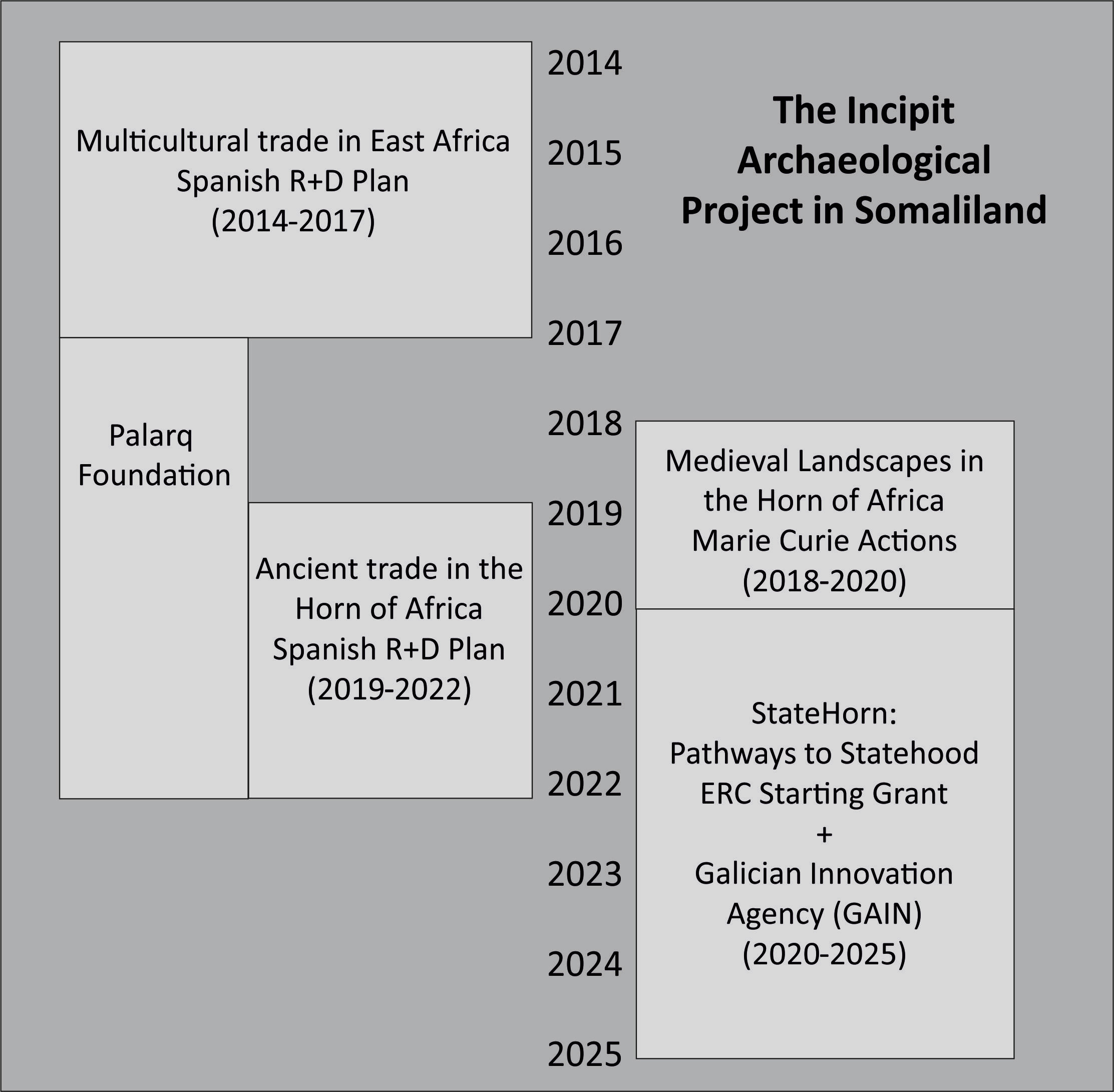 A graphic summarizing the different phases of the Incipit Archaeological Project in Somaliland through time. ©Jorge de Torres 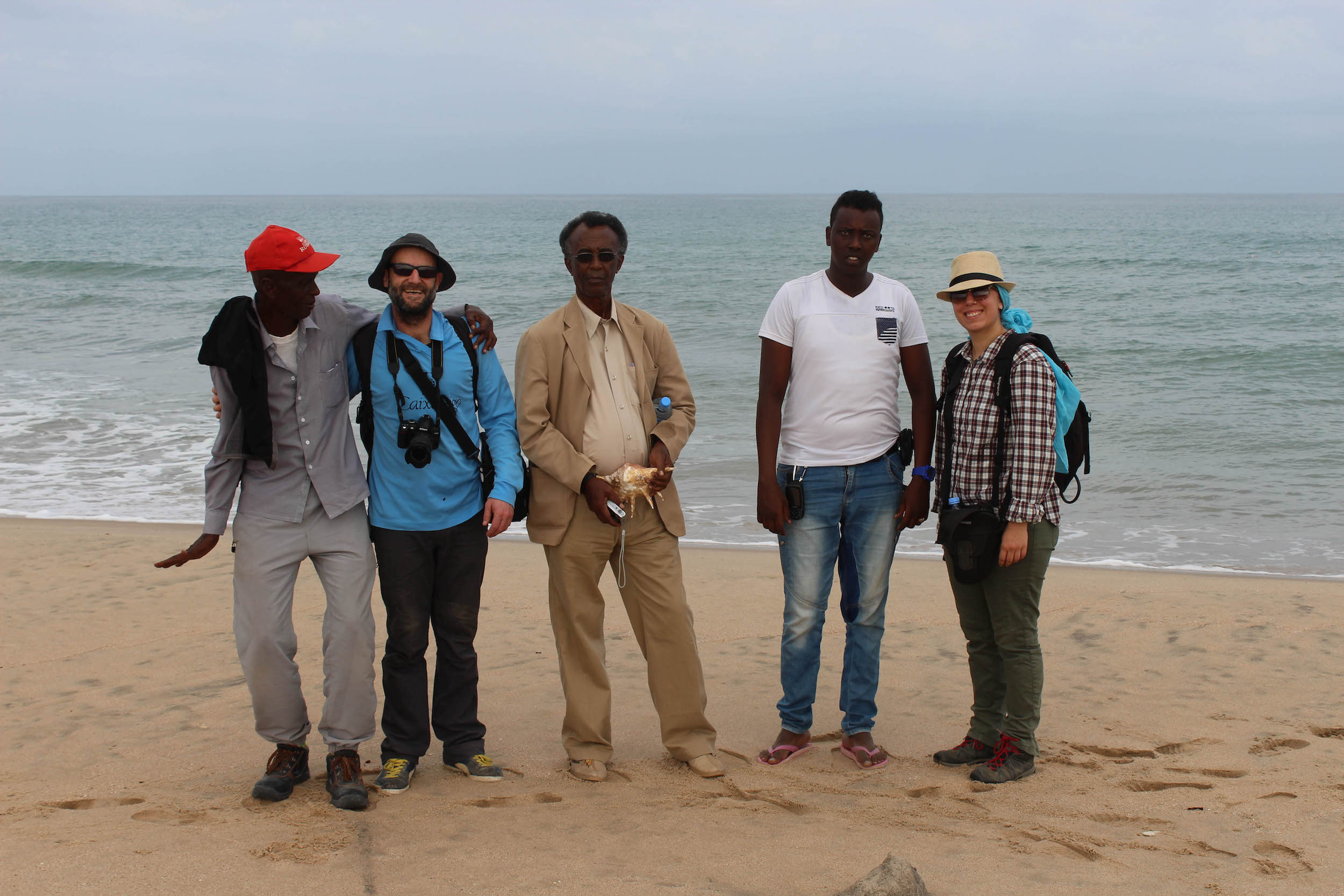