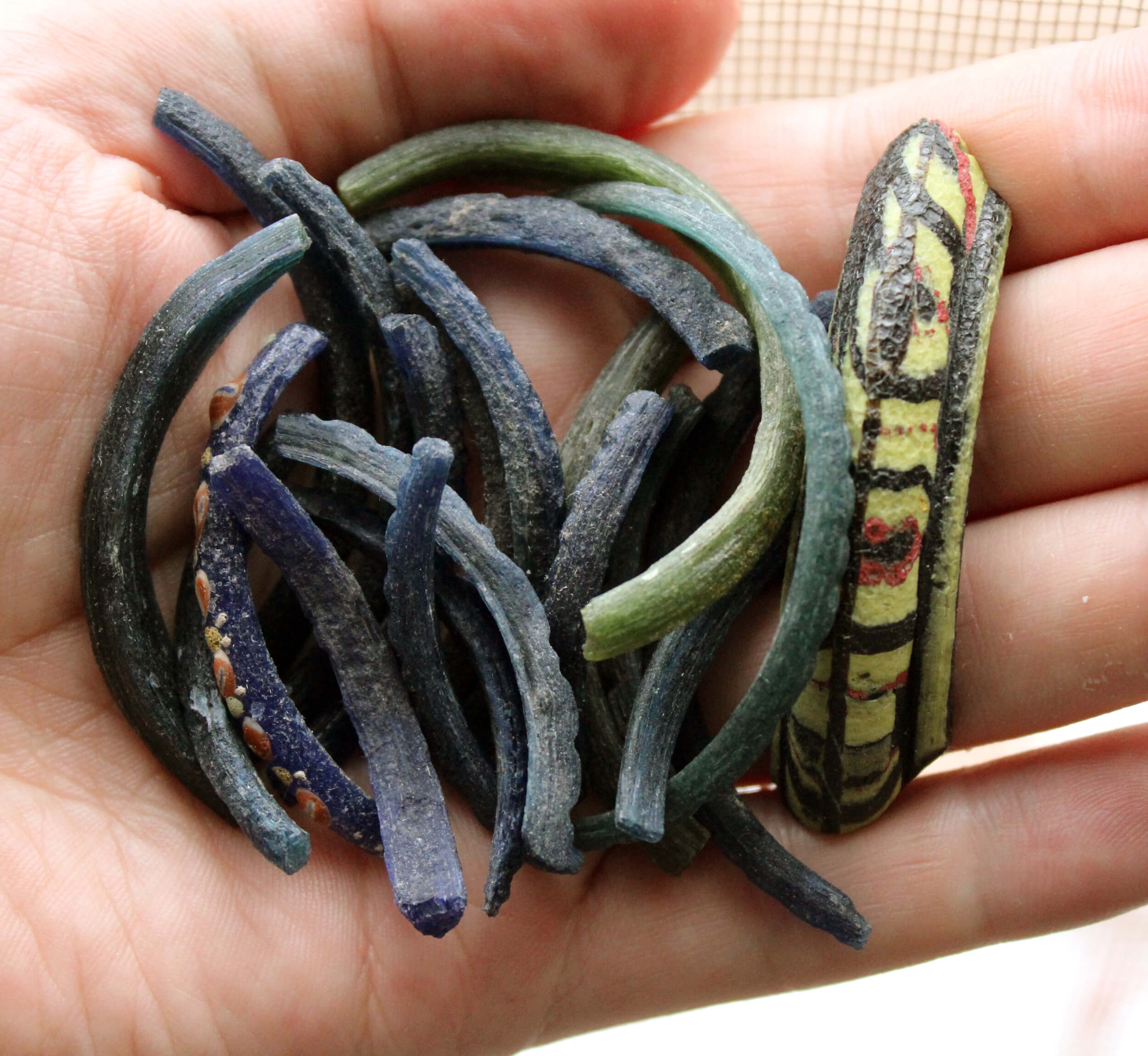 The Material Culture of Medieval Somaliland

The groups that inhabited western Somaliland during the Medieval period, nomads and urban dwellers alike, possessed a rich material culture which encompassed all aspects of life, from the daily activities to the objects employed in the religious ceremonies, social meetings and war. These objects were produced using a wide range of materials and besides their practical usages they often served to express the identity, the wealth or the social rank of the owner. Today they also provide the researcher with valuable information about the economic activities of a given group. Trade and exchanges can also be reconstructed through the study of the objects preserved in the archaeological record. Objects can show the extent and intensity of interactions between the people of the Horn of Africa and the rest of the world. Unfortunately, not all the materials endure well the pass of time. Thus, the objects produced of vegetal fibres, of wood, of animal skins and other perishable materials are rarely found in archaeological contexts. Therefore, the archaeological work about the material culture of a group is largely dependent on those materials that have been preserved until our days, such as glass, pottery, stone or, in some cases, metal. Ethnographic collections such as, for instance, those from the British Museum can help us understand, to some extent, how objects made from perishable materials could have looked like in the past as well as inform us about their uses.

Local and imported potteries in Somaliland

Among the objects that have been preserved to the present, pottery is the most abundant. In western Somaliland two main types of pottery can be found: the local wares produced in the villages and towns of the region, and imported pottery produced in a number of places, from Arabia and the Middle and Near East to as far as Asia and India. The imported pottery shows an astonishing variety of styles and its origins are manifold; the imported pottery includes well known types such as celadon and blue and white porcelains from China to Martabani wares, red slip Indian wares and yellow Yemenite pieces. Another group of pottery, very numerous, comprises the lesser known types of glazed and unglazed pottery which are currently under study and that could correspond to local pottery traditions from the Red Sea area, Egypt and Syria.

The study of the Somaliland imported potteries is extremely important in order to help establishing links with other better studied regions in the Red Sea area and the Persian Gulf. In this way solid comparisons can be drawn with other trade networks which flourished during the Middle Age in the Indian Ocean and a chronology of the evental shift of trade routes established. Although a great number of imported pottery originates from close areas such as the Arabian Peninsula and Egypt, the Incipit Mission in Somaliland has documented objects produced as far as in Vietnam, Japan or China. This seems to indicate that the Horn of Africa was an important trade hub at the crossroads of some of the main global routes that linked Asia, Africa and the Mediterranean. Most of these pieces are high quality objects used for consumption, although big containers from Asia and India have also been found. From a different perspective, some fragments of Ethiopian medieval pottery have been found in sites such as Hasadinle, close to the current border between Somaliland and Ethiopia. These pieces might indicate that trade was not only conducted between ports in the the coast and sites in the mainland, but also between the different regions and states of the Horn of Africa.

“In western Somaliland two main types of pottery can be found: the local wares produced in the villages and towns of the region, and imported pottery made in a wide range of places in Middle and Near East, Asia, India or Arabia.”


The second type of pottery is much less known. It corresponds to local wares used during the daily activities of cooking, storing food and water, or during the consumption of food. We know very little about the techniques and centres of production, regional differences, styles and the chronologies of the different types of vessels found in the settlements. This type of pottery was traditionally considered by the researchers lesser interesting and attractive than the imported wares and, in consequence, not much attention was paid to its study and organization. Only with the beginning of the Incipit project in 2015 a proper study on these pieces was undertaken. Paradoxically, the research has so far provided a large amount of information about the daily life of the people during the medieval period. Thus,  it has been found, significantly, that the shapes and decorative patterns of the pottery found throughout western are uniform: pieces are hand-made, of middle size and without any wall treatment. Three main types seem to have been recurrent: open bowls with the rim slightly engrossed, globular vessels with a short straight neck and spheric-like pieces with an almost horizontal, flat rim. Handles are abundant, either horizontal, curved handles with oval sections or smaller vertical handles with circular sections. The bases are all ringed. Decoration is usually scarce and limited to the neck or the upper part of the rim and it normally consists of incised simple designs (series of parallel horizontal or oblique lines). Only in very rare cases other types of decorations are present, as nail incisions or clay appliqués. 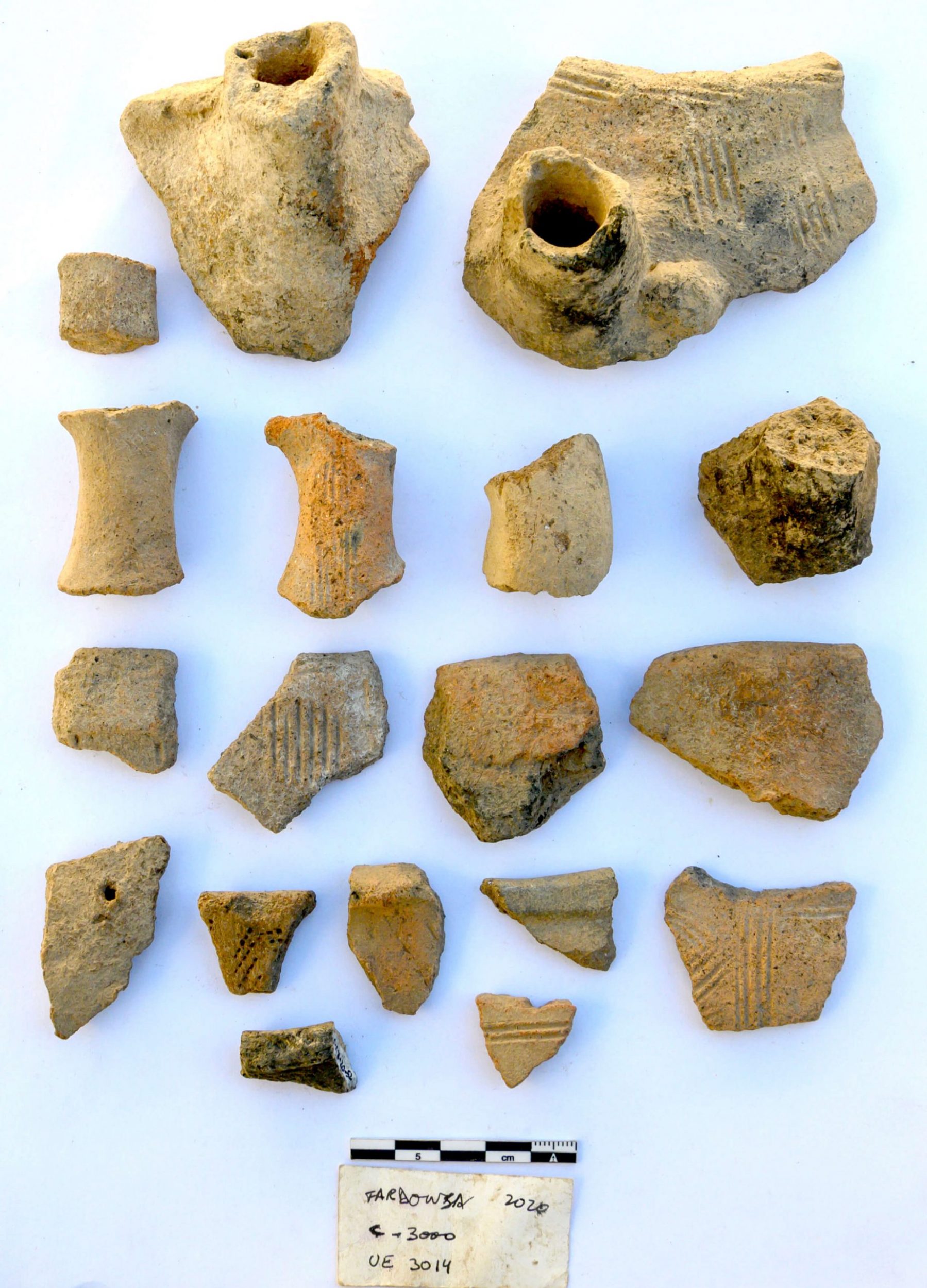 Although pottery is by far the most abundant material found in the medieval settlements, other types of pieces are relatively common, most of them imports. Glass vessels and bangles are present in most of the sites in a wide array of styles, and their origin can be traced to Egypt and Syria. Soft stone objects also appear frequently, as it happens in the Arabian Peninsula where these items are widespread and from where they were probably exported to the Horn of Africa. Metal, on the contrary, is scarce, although in the excavations conducted in the 1930’s some coins, a ring and an iron arrow were found (Curle 1937). Cowries –a type of shell original from the Maldives and used as a currency in large parts of the Indian Ocean- are also common, if not very abundant. The sample of material culture found in the medieval settlements of Somaliland can be completed by some examples of lithic tools –flint arrowheads and scrapers, weights for digging sticks and rotatory querns and hand stones, which are abundant across all the settlements. Although more humble than the imported pieces, they provide essential information about the use of local resources and the economic activities that constituted the subsistence of most of the settlements. 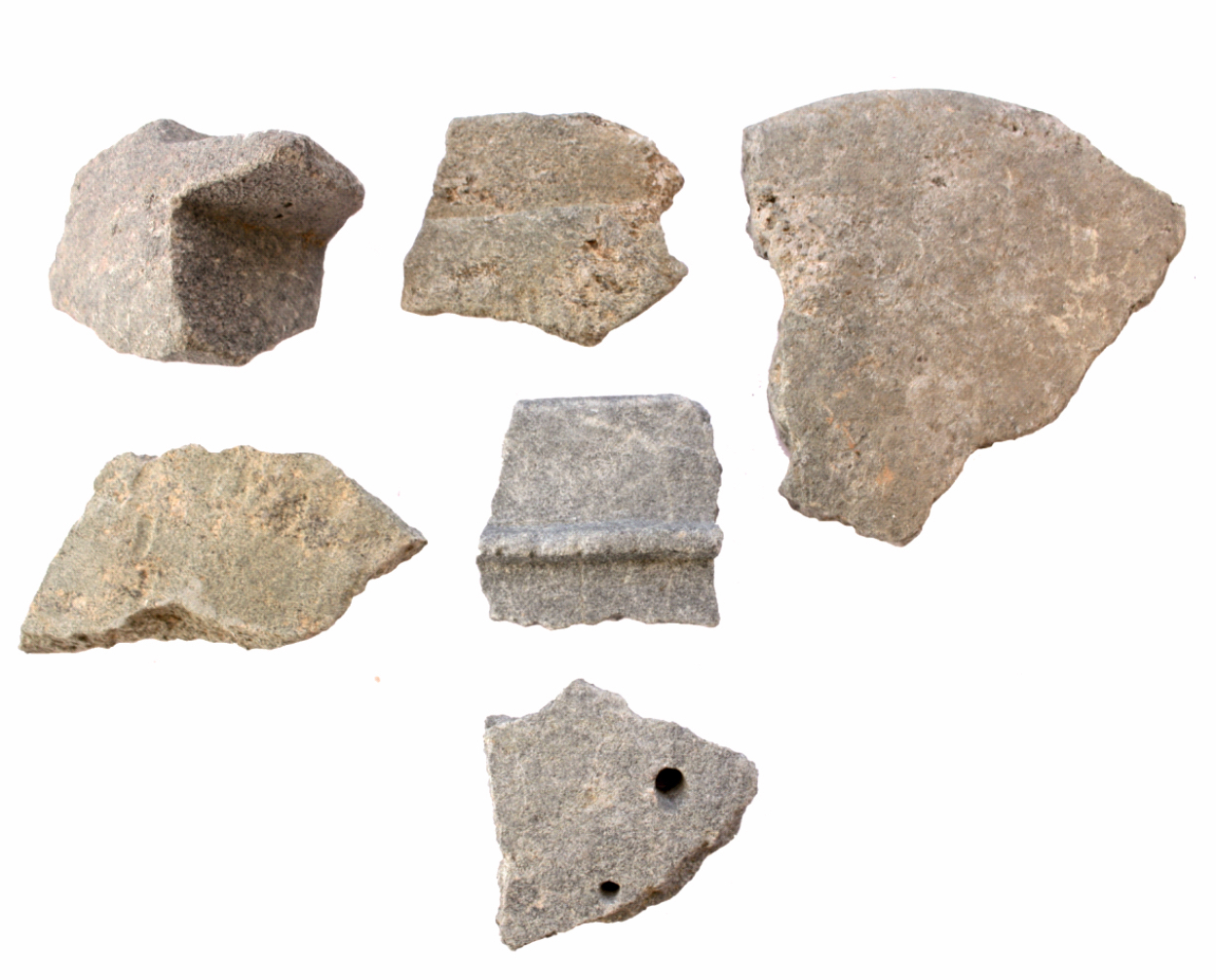 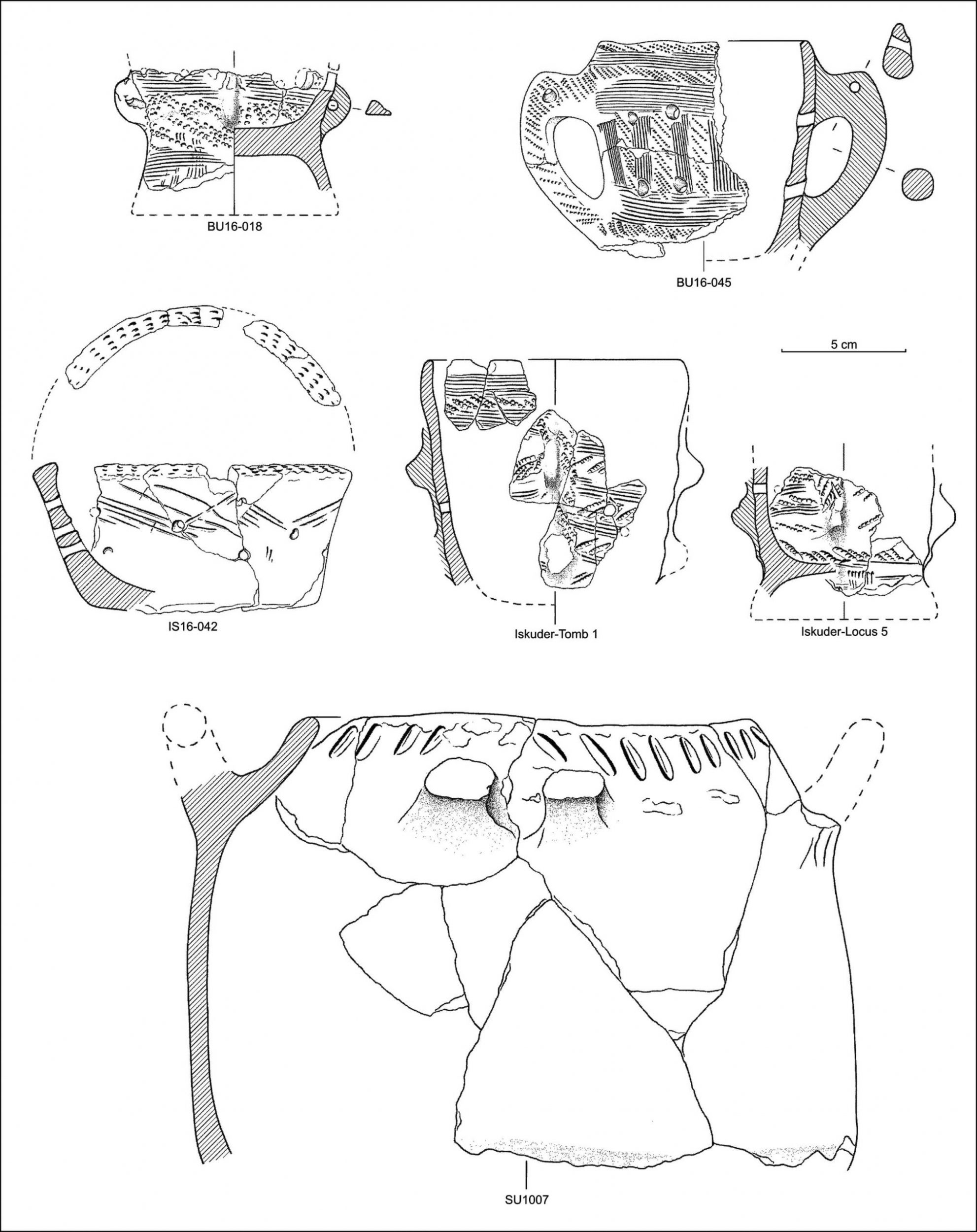